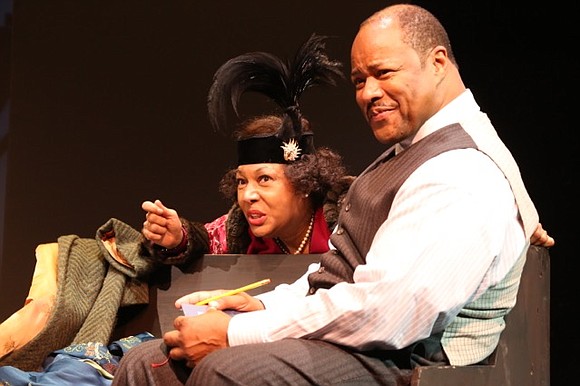 New Federal Theatre in association with the Castillo Theatre is celebrating the 125th birthday anniversary of Zora Neale Hurston with a wonderful play penned lovingly and respectfully by Laurence Holder entitled “Zora Neale Hurston, A Theatrical Biography.” In the show, playing at the Castillo Theatre on 42nd Street, the audience has the opportunity to learn about the journey that Hurston traveled as an important, outspoken member of the Harlem Renaissance.

Playing the role of Hurston is Elizabeth Van Dyke, who portrays her as an outspoken person who had a hard way to go as a child but managed to become a success because of her fighting personality. She was a visionary who didn’t let being a Black woman hold her back in any way. Van Dyke demonstrates the intensity, humor and creativity of Hurston. The audience hears about all parts of Hurston’s life, personal and professional. We realize how difficult and sometimes demeaning it was to be a Black starving artist in the early 20th century and how Black artists had demands placed upon them by their white benefactors.

Hurston was a very talented writer of fiction, plays and folklore and fought against Jim Crow laws.

This production is both educational and entertaining. Van Dyke is joined onstage by Joseph Lewis Edwards, who plays multiple roles with ease—he is Langston Hughes, Alain Locke, Richard Wright and Herbert Sheen, Hurston’s husband for a short time.

This production has outstanding direction by Woodie King Jr. and will only run through Nov. 20, so make plans to go!