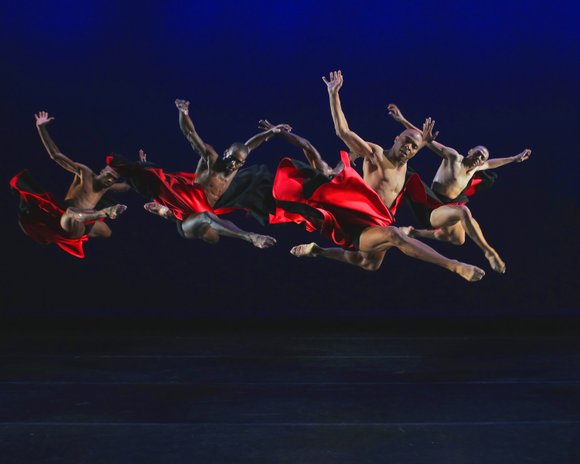 The power of dance to unite and inspire us while shining a light on important issues will take center stage when the Alvin Ailey American Dance Theater explodes onto New York City’s Center Stage (Nov. 30- Dec. 31) with a sizzling mix of thrilling dances, awesome dancers and mesmerizing music, all of which promise to warm your heart and make your soul dance.

“This season, Ailey’s passionate artists will transport audiences with over two dozen works, including timely and relevant premiers by Kyle Abraham and Hope Boykin that follow in the powerful footsteps of Alvin Ailey’s ‘Masekela Langage,’” Artistic Director Robert Battle stated. “We will also revel in the marriage of America’s two great art forms —modern dance and jazz—from the one-night-only opening to a variety of dances throughout the season that move to music by Duke Ellington, Dizzy Gillespie and Arturo O’Farrill and the Afro-Latin Jazz Orchestra.”

Pulling back the curtain on a scintillating season is a one-night-only program, “An Evening of Ailey and Jazz,” featuring Battle’s “Ella.” The dance is a tribute to legendary jazz singer Ella Fitzgerald preceding the 100th anniversary of her birth. It is the centerpiece of an evening of performances marrying music and dance, which includes Ailey’s “Revelations,” accompanied by live musicians and singers.

And that’s just opening night. What follows is a five-week season that is both thought-provoking and titillating. There is the unveiling of MacArthur genius Kyle Abraham’s completed suite “Untitled America,” which focuses on the impact of the prison system on African-American families. A three-part work, “Untitled’s” first two sections were premiered during previous Ailey seasons. Now, it, can be seen in its entirety.

Abraham, an outspoken artist who doesn’t shy away from grappling with issues of race, gender and isolation, said during a recent interview, “I hope people see this impetus for the work. It’s fine for me if there are three camps—one looking at the work and thinking of the prison system, the second thinking about family and a third that puts the two together.” The process of creating “Untitled” is a complex one that began a couple of years ago, with the first two movements unfolding gradually.

Abraham said, “One of the hard things about this work is we were making a work about families in the prison system and what that experience is like for Black families in particular. Ironically, when I was going into the studio to make that third movement, suddenly we were being shot dead even before we even got into the prison system. We couldn’t even get a fair trial.” Abraham struggled with acknowledging this harsh reality while not getting off track with the original impetus of the piece. Now that “Untitled America” will be presented in its entirety, the stark reality of the situation on the streets and on the stage is riveting.

Battle noted that “the unique juxtaposition of intensity and the sense of poignant longing, sadness and vulnerability” Abraham manages capture in a work where it can be difficult to strike a delicate balance when the subject is the unjust nature of a prison system that can easily evoke anger or outrage.

“r-Evolution, Dream,” which incorporates the AAADT dancers and members of Ailey II. Boykin, an Ailey dancer whose soulful authenticity has made her an audience favorite, has previously exhibited her choreographic talents in two earlier works. This new work, she says, was triggered by a visit to Atlanta’s National Center for Civil and Human Rights and hearing the sermons and speeches of Dr. Martin Luther King Jr.

“I was truly inspired,” she said. After exploring where the inspiration could lead, she shared the result with Battle, who liked what he saw.

“I love her work and enjoy her artistry,” Battle said recently, confessing that he delights in giving her a platform within the family.

In addition to being true to the Ailey tradition of providing a platform for emerging talent, Battle is also honoring the Ailey tradition of presenting audiences with a diverse and varied repertory that, on the one hand, captures the essence of the times, the way “Masekela Langage” does with its parallels between apartheid South Africa and Chicago’s South Side. On the other hand, the repertory stirs our souls to dance to contagious rhythms that inspired such dances as Ailey’s Ellington-inspired “Night Creature” or Ronald K. Brown’s “Open Door,” set to the mesmerizing music of Arturo O’Farrill and the Afro-Latin Jazz Orchestra.

Because the AAADT has long been the world’s premier modern dance repertory company, it’s no wonder this season offers a cornucopia of choreographic delights. In addition to works already mentioned, this season includes the company premier of Swedish choreographer Johan Inger’s daring contemporary take on Ravel’s Bolero, “Walking Mad,” and a new production of Billy Wilson’s “The Winter in Lisbon” (1992). Other season highlights include Ulysses Dove’s gut-wrenching dance for six women, “Vespers,” Battle’s testosterone-tinged “The Hunt,” Mauro Bigonzett’s mesmerizing “Deep,” set to the haunting global sounds of Ibeyi, and the works of modern dance pioneers such as Talley Beatty’s hot “Toccata,” Paul Taylor’s sizzling “Piazzola Caldera” and the original masterpiece that started it all, Ailey’s “Blues Suite” (1958). Adding to the moveable feast is Matthew Rushing’s “Odetta,” Rennie Harris’ “Exodus,” Judith Jamison’s soulful, sensual “A Case of You” and Ailey’s beloved “Love Songs” and “Cry,” the singular solo choreographed on Jamison and dedicated to “all Black women everywhere, especially our mothers.”

The AAADT season also includes a special performance Wednesday, Dec. 14 “Celebrating Ronald K. Brown” and his 20 years choreographing for the AAADT. Another highlight is the Family Matinee Series, featuring performances on four Saturdays and the final Friday at 2 p.m. with a question-and-answer session with the company dancers after a finale of Ailey’s “Revelations.” And, given the roller-coaster year 2016 has been, isn’t it wonderful to end it with Ailey’s masterpiece bringing an uplifting close on Christmas Eve (both Dec. 24 matinee and evening performances) and a special season finale on New Year’s Eve? All in all, it is a wonderful way to ring out the old and bless the new.