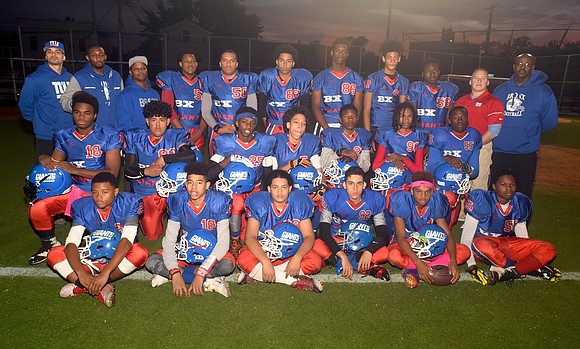 As I watched the Bronx Giants play football Saturday afternoon on Evander Childs High School’s field in the Bronx, I couldn’t help but remember the days of when the Black Spades hung around there, watching from the Gun Hill Road—Jack in the Box side, or when my father took me to the bicycle shop down the block on my 12 birthday to buy me a 10-speed Raleigh bike, and when Ron Frazier and I walked out of Evander after school on that January day of our senior year and 20 minutes later, he was no longer here with us.

Those were just some of my thoughts and memories while watching the Bronx Giants’ 10-, 12- and 14-year-old teams play against the Mustangs, a competing youth football program from Paterson, N.J.

The Bronx Giants program, a not-for-profit organization, was started five years ago by Thomas Wilder, who began coaching his sons in flag football when they were 4 and 8. At 8 and 12, his sons advanced to tackle football. The program that they played for disbanded two years after his sons began. To keep the team together, Wilder, also one of the team's coaches, took the initiative to begin the Bronx Giants football organization.

“I was inspired by the kids,” said Wilder, 52, born and raised in the Bronx. “I recognized the many life lessons that they learn from the game, like dealing with adversity, team work and the aspects of leadership. Since they played like older kids, I called them little Giants, which evolved to Bronx Giants. Plus, the New York Giants were Super Bowl champions at that time.”

Wilder, head coach of the 12 and under team, is assisted by volunteer parents who are instrumental in running the program and coaching the other teams. “Frank Rue coaches our 10s and Anthony Sanders coaches the 14s,” noted Wilder. “Jose Villanueva, Raymond Pena, Deon Cameron, Jeremiah Laureano and Anthony Sanders are our assistant coaches and coordinators. Linda Ojeifo and Lesley Koram are our team nurses, and Kyesha Strouble recruits.”

Each team has 15 to 25 players. There’s also an 8 and under team. They begin practice in March. They play in June and July.

Each division has an eight-game schedule. There’s a playoff game and a championship game for the teams that qualify. They’ve played in the nationals in Florida and in Virginia.

They stress education and provide tutoring to players who need it. Several of their players are on high school and college football teams. Christian Anderson is the starting quarterback for Cardinal Hayes. There are several other former Bronx Giants also on their roster.

“I can’t remember all of the kids names right now, but don’t forget to mention Kassielle Pena, who’s a senior at Brooklyn Tech,” said Wilder. “She’s a wide receiver good enough to start, but they sub her.”