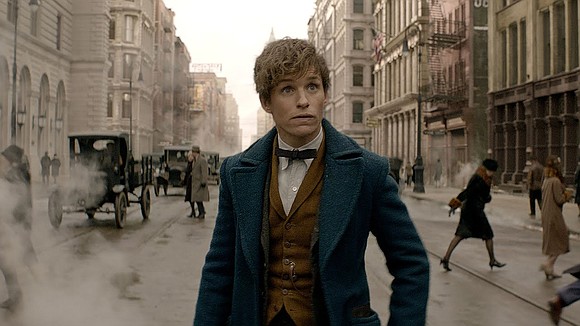 "Fantastic Beasts and Where to Find Them"

J.K. Rowling’s prequel, “Fantastic Beasts and Where to Find Them,” is better than her “Harry Potter” series, which took the single mother, who was living on government assistant programs, into the realm of the very wealthy and beloved.

In this new universe, she expands into a mystical, magical world using some existing

storylines to dip into its past for an intelligent, gripping and fully entertaining prequel that only deepens the “Potter” universe and pushes everything about its magic and its characters into a fresh and bold direction.

Set in New York circa the 1920s, “Fantastic Beasts and Where to Find Them” lines up the magical and nonmagical world with equal detail. In this installment, director David Yates whips up a visually rich environment, and Rowling (who wrote the screenplay) introduces a terrific main character in Newt Scamander (Eddie Redymayne) as an animal conservationist who lives to protect misunderstood magical beings that he collects and keeps safe inside his expansive suitcase.

A British explorer with a plucky heart, Newt is passing through New York on a quest to find

endangered creatures when he runs into nonmagical simple aspiring baker, Jacob Kowalski (Dan Fogler), who inadvertently switches suitcases with Newt on the street. When Jacob inadvertently lets some of the curious animals escape, the result is havoc on the city.

Racing against time, Jacob joins forces with Newt and a struggling investigator, Tina Goldstein (Katherine Waterston), and her mind-reading sister, Queenie (Alison Sudol), to contain the problem before the nonmagical public finds out. In the process, they must also avoid detection by MACUSA, the governing body of the American wizarding world that will dish out serious punishment to anyone who reveals its existence.

and his attention toward a fragile pupil Credence (Ezra Miller) whose lack of a backbone is source of irritation.

The jewel of this masterpiece does not lie solely with the introduction of fantastic beasts or where to find them. Frankly, the real magic and charm is the developing relationship between Queenie, Jacob, Newt and Tina. Never has a foursome been better crafted.

“Fantastic Beasts” already has a sequel on the way, and with Newt arriving in 1926 America and the stock market crash is right around the corner, it’s the perfect time to draw the storylines of the impending dark and evil times approaching the world.

To stamp out mania, the MACUSA organization (under the leadership of Carmen Ejogo as its stern president) imposes additional restrictions on their community, under the guise of protecting normal people, who they call “no-majs” the U.S. version of the U.K.’s muggles.

The issues of intolerance and destroying beings that are misunderstood are front and center, with Newt commenting that “the most vicious creatures on the planet, [are] humans.”

Rowling’s screenplay is spot on and as with the Potter books and films, she keeps tabs on the human dimension, crafting an old-fashioned romance between Jacob and Queenie, and setting the dramatic stage for a tragic conflict of values when it becomes sadly clear that relationships between humans and magical beings are strictly prohibited.

Redmayne is good but Fogler (Jacob) and Sudol (Queenie) are better. Her “melt your heart” smile and Betty Boop persona marries comically well with her telepathic abilities.

Oh, yes and the “fantastic beasts” almost steal the show, giving cinematographer Philippe Rousselot a big, cinematic playground to prance around in.

“Fantastic Beasts and Where to Find Them” opened nationwide Nov. 18.