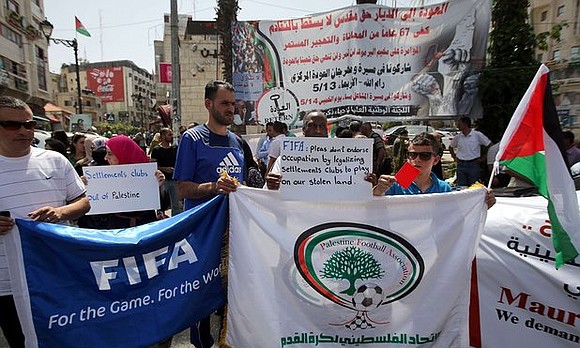 Rights organizations are pushing the international soccer association, FIFA, to crack down on Israeli soccer clubs that have settled in occupied Palestinian lands in violation of specific FIFA rules.

Rights groups say that according to FIFA policy, teams can only play on the territory of another FIFA member with that member’s permission. The Israel Soccer Association organizes matches in settlements and allows six settlement teams to play in Israeli leagues but has not obtained permission from the Palestinian Soccer Association.

Human Rights Watch, in a letter to the U.N.’s High Commissioner for Human Rights, wrote that the Israeli clubs’ playing grounds, including one indoor hall, are built on land unlawfully taken from Palestinians, mostly by seizing land belonging to Palestinian individuals or Palestinian villages, declaring it state land, and then designating it for exclusive Israeli civilian use.

Sexwale, who heads a FIFA committee established to deal with Israeli-Palestinian soccer issues, has been under fierce attack since he appeared to backtrack at a FIFA congress on well-settled court rulings, by calling the occupied territories “territory in dispute.”

“He is ignoring the stated position of his party and the South African government, U.N. resolutions and the Oslo Accords,” said Kasrils. “It is a shame that this once-proud freedom fighter has succumbed to opportunism owing to his craven ambition to become a contender for high posts within FIFA.”

Under apartheid, it was argued that including South African sports teams in international competitions legitimized the system of racist segregation.

The U.N., the U.S. and the EU have all recognized Israel in its pre-1967 borders and do not recognize its sovereignty over the occupied territories. Nonetheless, FIFA President Gianni Infantino and Sexwale repeatedly refer to the West Bank as disputed territory, adopting the term sometimes used by the Israeli government, as opposed to the international legal consensus, according to which it is “occupied Palestinian territory.”

Arthur Lenk, current Israeli ambassador to South Africa, dismissed the controversy as “an attempt by the Palestinians to poison every forum around the world, from the WHO to Unesco to FIFA … They don’t care about soccer or the WHO, or heritage, they just want to get people talking about their own issues.” w/pix of Palestinians demanding expulsion of Israel from FIFA