‘Pressure Makes Diamonds’ a gem of a book 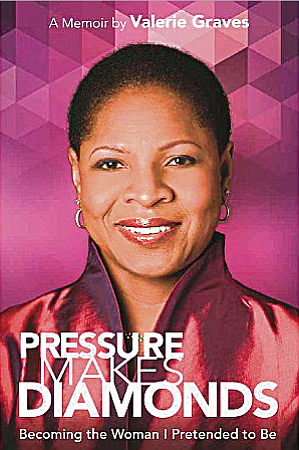 In her memoir “Pressure Makes Diamonds—Becoming the Woman I Pretended to Be,” Valerie Graves has spun an appealing narrative with a protagonist who reads like an African-American female counterpart of Horatio Alger. Her journey from Mud Lake, Pontiac, an exurb of Detroit, to a corner office on Madison Avenue is exhilarating, marking her rise to the upper echelons of advertising and providing readers with an exposé of her creative life and the world ruled by “Mad Men.”

Perhaps the best way to introduce Graves is through her handiwork in the production of a countless number of memorable commercials, including the one she helmed for Pepsi Cola, featuring Wyclef Jean. Some semblance of her remarkable odyssey was captured in the movie “Boomerang,” with Halle Berry portraying her.

But long before Hollywood and Berry, Graves had already offered her own versions of make-believe as suggested in the book’s subtitle. A good portion of her life, she confesses, was spent pretending to be someone she wasn’t. Even so, “pretending myself into being was the salvation of my self-image,” she wrote.

What becomes immediately apparent in her quest for self-discovery is her ability as a writer. Her saving grace, whether as a copywriter, ad executive or producer, is her gift of words. Of all the variety of endeavors she admits throwing herself into, she explains that it was only in the “world of words, where I always seemed to land on my feet.”

Her engrossing memoir is further evidence of her ingenuity to land on her feet. She is a compelling storyteller, whether recounting her personal ups and downs or her episodic professional career. And no matter the tale, she doesn’t hold back—she lays it all on the table. As she notes toward the end of the book, “The secret of my comfort is now being grateful for the truths of my life.”

Graves honestly discloses her days at UniWorld, Motown and several other agencies, each venture featuring a roller-coaster ride of euphoria and disappointment, and then the ultimate satisfaction of how her experiences have paved the way for others.

“When I look back, however, it’s not the ads I’ve created—or even any award or recognition—that is most important to me,” she mused. “It’s the careers I’ve helped shape that touch my soul deepest.” And those she has touched includes a list of luminaries in a variety of industries—advertising, publishing, film, theater and more.

Graves explains, “The quest to put Mud Lake behind me has not been the driving force of my life for a very long time. The child pretending past Mud Lake had become a woman who happily basks in the warmth of a once-scorned Harlem.”

“Pressure Makes Diamonds” is an apt title for a woman who endured a multitude of stressful moments and became a priceless jewel of a writer, and a jewel to be treasured by all who have ever pretended to be something they eventually became.