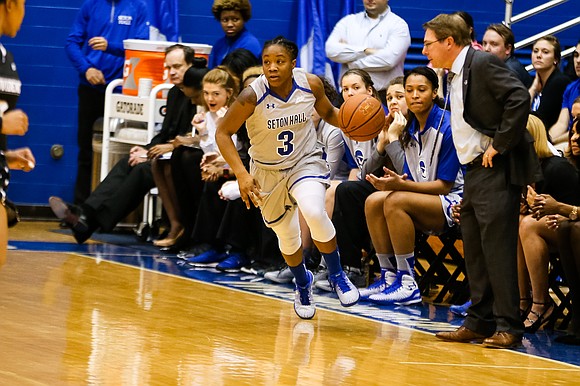 After three successful seasons the last two of which concluded with trips to the NCAA Tournament, the Seton Hall University Pirates have high expectations. But this year’s roster doesn’t have as many veterans, so the nine freshmen (one a red shirt) have to learn the pace of college basketball and make things happen.

“We’re coming together as a team,” said coach Anthony Bozzella. “It’s been very difficult. We have at times five freshmen on the floor.”

All but one of the upper classmen have not previously been starters or key players. There are some injuries, including one player with a stress fracture. In addition, four players have been serving three-game, equipment-related NCAA suspensions. Thankfully, the suspensions have been staggered, so all haven’t been out at once.

The team opened with three wins, but lost this past Sunday at the University of Minnesota. They practiced this week Tuesday and Wednesday, but have Thanksgiving off to spend with family and friends. It’s back to practice Friday because the Pirates are hosting the SHU Thanksgiving Classic this weekend.

“Her work ethic has been outstanding,” said Bozzella. “There isn’t one day where she’s not trying her hardest all the time. She brings an understanding of the college game.”

Freshman guard Kaela Hilaire has been averaging 14.3 points per game, mostly off the bench. Bozzella describes her as bright and mature with tremendous potential.

The players are learning how to overcome fatigue and play as a cohesive unit. Alumnae that helped build the Seton Hall women’s basketball program, including Shakena Richardson, Janee Johnson, Daisha Simmons and Aleesha Powell, have been at games to cheer on and inspire the next generation.

As of the Nov. 30 game against in-state rivals Princeton University, all the players will be eligible to play. Bozzella is excited to see where the season takes them.

“I know we’ll bounce back from the [Minnesota] loss,” Bozzella said. “This is a good group of kids. Play together and play as a group. When you do that, you have a chance to have success.”