Obama: My prayers are with the Cuban people 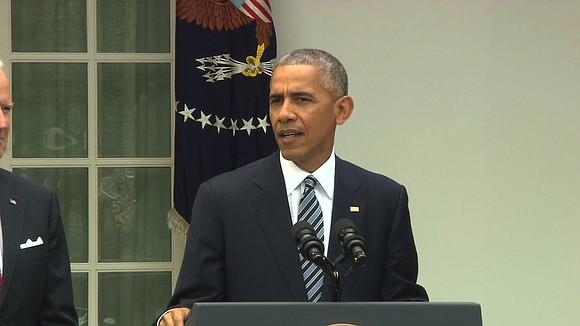 President Barack Obama promised to work for a "smooth transition" of power to President-elect Donald Trump when he leaves office in January, citing the example set by former President George W. Bush eight years ago. POOL

(CNN) -- President Barack Obama reacted to the death of Fidel Castro in a statement released by the White House Saturday morning, offering condolences to his family and extending a hand of friendship to the Cuban people.

"During my presidency, we have worked hard to put the past behind us, pursuing a future in which the relationship between our two countries is defined not by our differences but by the many things that we share as neighbors and friends -- bonds of family, culture, commerce, and common humanity," Obama said, highlighting his efforts to mend US-Cuba relations during the course of his presidency.

"We know that this moment fills Cubans -- in Cuba and in the United States- - with powerful emotions, recalling the countless ways in which Fidel Castro altered the course of individual lives, families, and of the Cuban nation," the statement said. "History will record and judge the enormous impact of this singular figure on the people and world around him."

The President added, "Today, we offer condolences to Fidel Castro's family, and our thoughts and prayers are with the Cuban people. In the days ahead, they will recall the past and also look to the future. As they do, the Cuban people must know that they have a friend and partner in the United States of America."

"President Obama issued a pathetic statement on death of dictator #FidelCastro with no mention of thousands he killed & imprisoned. #Cuba," Rubio's tweet said.

Former Florida Gov. Jeb Bush llso noted that the President did not reference Castro's victims. "Failing to mention that millions have suffered because of Fidel Castro is a tragedy," Bush tweeted.

Obama made a historic trip to Cuba in March as the first US president to visit the country since Calvin Coolidge in 1928.

While in Havana, Obama told Raul Castro the Cuban embargo would end at a press conference with the Cuban leader, but that didn't stop Fidel Castro from criticizing the trip.

Fidel Castro slammed Obama's visit in an article published in the Cuban communist party newspaper. "We don't need the empire to give us anything," Castro wrote.

The trip was part of a number of Obama administration initiatives to reopen economic and diplomatic ties between the two nations.

Texas Sen. Ted Cruz wrote an op-ed for Politico and said the trip was a signal to political prisoners in Cuba that "the world has forgotten about you."

Castro's death was announced Friday night. He was 90 years old. The funeral is set for December 4, after nine days of mourning.

Secretary of State John Kerry said Saturday that the US and Cuba would continue to move forward despite the two troubled past between the two nations.

"As our two countries continue to move forward on the process of normalization -- restoring the economic, diplomatic and cultural ties severed by a troubled past -- we do so in a spirit of friendship and with an earnest desire not to ignore history but to write a new and better future for our two peoples," he said. "The United States reaffirms its support for deepening our engagement with the Cuban people now and in coming years."