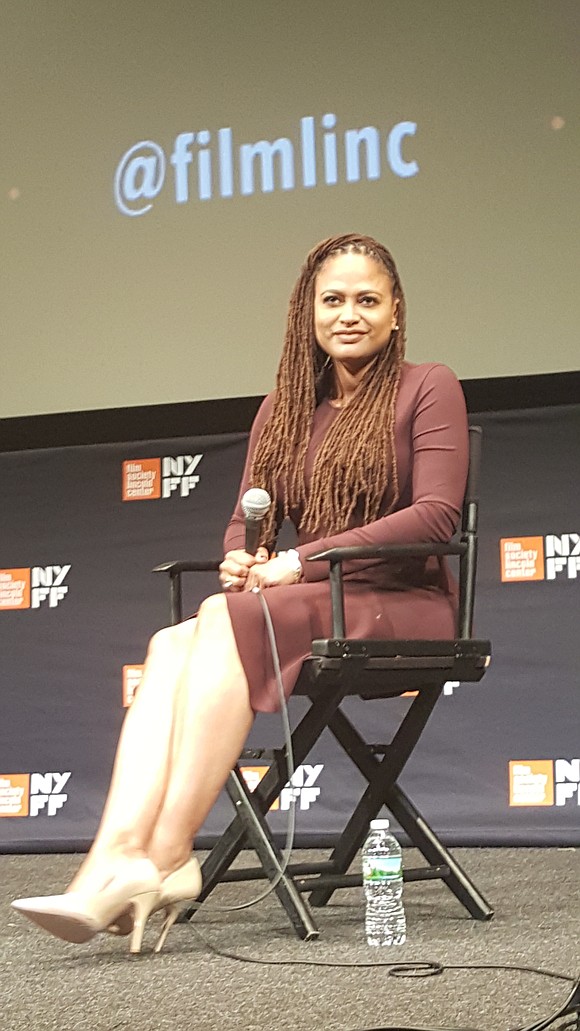 Ava DuVernay’s “13th” opened the 54th New York Film Festival with a jolt! Did you feel it?

At the screening and talk back, DuVernay discussed the finer points that are part of “13th” that bring the truth up to an uncomfortable boil, which is anchored by our ongoing political conversation that focuses on race, inequality, slavery, police brutality and now, Black Lives Matter.

Available on Netflix Oct. 7, the documentary takes its title from the 13th Amendment to the U.S. Constitution, which abolished slavery and involuntary servitude, except as a punishment for criminal behavior.

Except for “criminal behavior.”

Here is where the documentary illuminates the loophole that the United States of America is exploiting, with corporations the beneficiaries and our communities of the color the victims.

DuVernay uses the 13th Amendment as a jumping-off point to show the truth of how, after the Civil War, African-Americans were arrested en masse and used to replace the free labor of the slavery system. These are facts.

The “13th” shows what built the “mythology of Black criminality,” which has persisted to this day, and part of how the media describes the Black and Brown communities. Who owns the media machines? It’s an easy answer to follow the money all the way up to the 1 percent that run the world, of which the United States of America is just one small part.

Here are some excerpts from the Q&A by Ava DuVernay.

“Growing up in Compton, I felt like there was an atmosphere where the police presence was all over, it felt like an intrusion, and I could feel its harmful effects. It was an oppressive feeling.”

“The film has so many tangents you can go down to cover the story. I wanted to put it together in a way so that folks can see a different side of the picture. I was looking for an organizing principle, and I thought chronologically.”

“This moment, this Black Lives Matter moment, it’s not a moment. It’s a movement … people thought, ‘Oh, will it last?’ Well, it has lasted. It’s changed things. It’s forced candidates to talk about things that they did not talk about in previous elections. It’s opened people’s minds. It’s changed art-making. It’s changed music. People are seeing things through a different filter now.”

In our current political circus where the wildly unpopular Hillary Clinton and the villainous, hate-mongering loser, aka Donald Trump, are running to run this nation, DuVernay’s careful handling of both opponents, in the doc, is a mark of brilliance. She allows the truth to set the tone, utilizing the actual words uttered by the “insane” Trump to underscore why he is so dangerous to this nation.

On Hillary Clinton and Donald Trump

“‘13th’ is the jumping-off point for a conversation, a wide-ranging conversation, that gives you a tour through the history of racism, oppression and subjugation in this country of Black people as it relates to the criminal justice system. ‘13th’ is speaking about the 13th Amendment, specifically the criminality clause, which states that slavery is abolished in this country, except if we decide that you’re a criminal.

[A section in “13th”] … Donald Trump and his comments and his call for the—for death of the Central Park Five, taking out an ad, really being on the forefront of that issue, fits into a section where we talk about media imagery and the insidious nature of the slanted media imagery, and then Mrs. Clinton, with comments that she made about superpredators, comments that she’s made about reversing at her husband’s legislation in the 1994 crime bill, her support of that at the time. So, they are embedded in the documentary in a historical context, not even speaking of them as

“There’s a survival there that still allows for there to be a light, and that is such a strength, that is such a beauty, that whenever I see Black people gathered, more than one, gives me hope.”