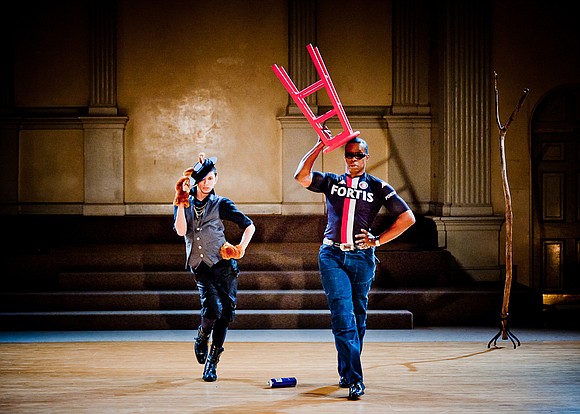 Archie Burnett and Javier Ninja in "Elements of Vogue" Contributed

This month’s calendar is filled with events and performances that revisit the history of dance, offer a mix of dance from different cultures and look toward the future. Now in its 11th year, Danspace Project’s Platform series returns (Oct. 6 –Nov. 19) with 80-plus artists in 28 events. Originated with Ishmael Houston-Jones’ rediscovery of writings by choreographer John Bernd, who died of AIDS in 1988, the series is curated by Houston-Jones and Will Rawls. Titled “Platform 2016: Lost & Found,” according to Houston-Jones, this iteration promises to “look back at the plague years of mass AIDS hysteria, specifically 1981-1996, [and] recover the loss of a generation of mentors, role models and muses.”

“Bernd was one of the earliest New York choreographers to represent gay sexuality and the disease explicitly in his work,” said Houston-Jones. The title of this series is taken from his 1981 trio of dances. “Lost and Found” will “place particular emphasis on countering the historical perception around HIV/AIDS as a disease that primarily impacted white gay communities.” Houston-Jones asked, “Are there young LGBTQ artists who are making work today unconsciously under the influence of John Bernd and all the others who died before they were born?”

Oct. 6—As part of BAAD’s BlakTinX Performance Series, featuring art and performance by Black, Latin and other artists of color, BAAD’s Arthur Avilés celebrates the 30-year anniversary of “Periodic Solution” (1986), a solo by Jean Churchill, one of his first dance teachers at Bard College. Avilés will dance the work, and then the movie, a reception and a Q&A will follow. For more information, visit www.BAADBronx.org.

Oct. 6-9—The ninth biennial BomPlenazo 2016 celebration of Afro-Puerto Rican Music & Dance comes to Hostos Center for Arts and Culture, with national, international and intergenerational bomberos and pleneros in performances, workshops, panels and a film. For more information, visit www.hostoscenter.org.

Oct. 8—For one evening only, at the New Jersey Performing Arts Center, Savion Glover premieres “Chronology of a HooFer,” a solo performance that chronicles his lifework and pays tribute to his mentors. For more information, visit www.njpac.org.

Oct. 16—Sundays on Broadway, a free and intimate, ongoing series featuring performances, film screenings and discussions, presented by the Cathy Weis Projects at WeisAcres, continues with Patricia Hoffbauer and Yvonne Rainer on a shared program. For more information, visit www.cathyweis.org.

Oct. 25-30—At the Joyce Theater, Bill T. Jones/Arnie Zane Company premieres parts one and two of “Analogy/Trilogy.” The New York premiere of “Analogy/Dora: Tramontane,” based on an oral history Jones conducted with 95-year-old Dora Amelan, is part one and “Analogy/Lance: Pretty, aka The Escape Artist,” based on an oral history Jones conducted with his nephew, Lance T. Briggs and described as “A tragic yet humorous journey through the sex trade, drug use and excess during the 1980s,” is part two. Also part of this season is a conversation between Jones and visual artist Carrie Mae Weems (Oct. 29) and