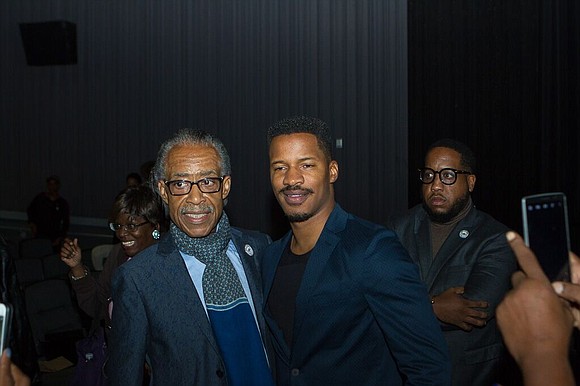 The Rev. Al Sharpton was born Oct. 3, 1954. Nat Turner, the rebel leader, was born Oct. 2, 1800. Charismatic Al and cinematic Nat converged Monday evening at the Magic Johnson Theater, thanks to Nate Parker’s film, “The Birth of a Nation.”

Although a century and a half apart, there exists an interesting intersection of their lives. Many of the issues that prompted Turner’s revolt in 1831 in Southampton, Va., have for the last generation spurred Sharpton’s activism. Perhaps the only difference between them is the means they used to change the oppressive conditions.

A jam-packed theater was given a full, brutal tableau of the slavery that Turner was no longer willing to tolerate. One savage incident after another, including the rape of his wife by a mob of white men, pushed him to revolt, and it’s that revolt that has forever immortalized Turner and his rebels.

While we may quibble with the actual details of the uprising and the way it was finally put down, there is no argument in Parker’s depiction of Turner, his gradual resentment and indignation of the treatment he and the other captives endured. For several days of slaughter and mayhem, Turner and his small band killed 55 to 60 white men, women and children, depending on the source, sparing few as they moved from one slave-holding family to another.

What we know of Turner’s life is mainly distilled in the brief confession he dictated to a white lawyer after his capture. Over the years there have been many interpretations of Turner’s rebellion based on the confession, including William Styron’s disputed novel in 1968. But, for the most part, Parker, who wrote the screenplay, portrayed Turner and directed the film, tacks closely to Turner’s confession, a confession not entirely free of the lawyer’s predilections.

It would be helpful if viewers of the film read Turner’s words to see the extent to which Parker remains true to his confession and the recollection of his experiences in bondage. From the very beginning of the film we see how Turner grows from a child born with a gift of prophecy to a man deeply imbued with Christian values and a devotion to ministry, much to the benefit of his master. Parker takes some liberty with Turner’s intellectual development, suggesting that it was his white mistress who taught him to read when in his confession he cites his parents as his teacher.

Parker is very deliberate in assembling the pieces of the inevitable mayhem. There are the conventional flashbacks of grisly scenes, none more wrenching than the forced feeding of an obdurate captive whose teeth are smashed out, bloody and battered Black corpses with faces so disfigured that it’s hard not to think of Emmett Till. And the lynched youth certainly comes to mind when Turner consoles his raped wife, her face beaten and bloated beyond recognition. Oddly, Turner never mentions the rape nor the fact that he had a wife and child in his confession.

There was a collective cringe and gasp in the theater with each blow from a whip that Turner received on his naked back. This may have been a bit too gratuitous since Turner never mentions such a whipping in his confession. In fact, most of his reflections present incredibly gentle masters. Of course, many of the strikes against the enslavers came from house servants.

In contrast to the squirms the audience expressed during the beatings were the outbursts of applause when Turner and cohorts began their acts of retribution. The loudest clapping occurred when one of the white slave drivers is decapitated. Like some members of the audience in the same theater who talked back to the screen when “Django, Unchained” was shown, there were occasional screams that appreciated the turn of events.

At the end of the screening, Sharpton praised Parker, stating that he had taken the “the artistic and creativity he was given and invested it in telling a story that has not been told at this level …but the pain and suffering continues.”

Before giving the microphone to Parker, Sharpton, without explicitly discussing the clamor that has surrounded Parker and his acquittal of rape charges in 1999, noted that his appearance in Harlem was about the film and nothing else. “The film is the focus point of this event,” he said.

“When I grew up, I didn’t have Nat Turner,” Parker told the attentive audience. “There were stories about [Thomas] Jefferson and Eli Whitney and the cotton gin, but I never learned about people who looked like me and had a voice in the narrative of our liberation.

“For too long we have been miseducated about who we are,” Parker continued, summoning some of the preaching he delivered in the film. “Nat Turner wasn’t the only one who resisted. The legacy of Nat Turner means so much to me because it breaks the mental chain … that we have no value and that we waited for others” to bring about change.

Parker then congratulated Sharpton, saying that Sharpton “has stood up for us and we got to stand up for him. I am not a reverend—I am an artist so I put my art next to him and everything he stands for in this community.”