An American president finds himself on trial 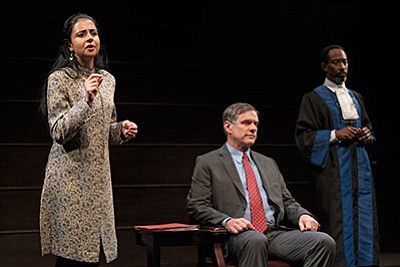 Mahira Kakkar, Michael Rogers, and Tony Carlin in "The Trial of an American President" Ken Nahoum

To some, George W. Bush is considered a war criminal, having plunged the United States into two needless Middle East wars, one in Afghanistan and the other in Iraq. The death toll is enormous on both sides and the property damage incalculable. There are those who feel Bush was allowed to ride off into the sunset without being held responsible for what he set in motion, including the rise of terrorism.

A play that opened Sept. 29 at the Lion Theater (under limited engagement), located at 410 W. 42nd St. in Manhattan, entitled “The Trial of an American President,” explores the issue of whether Bush should be held accountable. A new drama by Dick Tarlow with Bill Smith, directed by Stephen Eich and produced by Shelter Entertainment LLC and Hello Larry Ltd, puts Bush on trial before the International Criminal Court at The Hague.

The accused must volunteer to appear, which naturally few would. However, in the play’s accounting, Bush (Tony Carlin) agrees to attend the trial before the International Criminal Court prosecutor, played by Michael Rogers. He claims he is there to face the court in an effort to clear his name and reputation, against the advice and to the dismay of his family and advisers. In his defense, Bush repeatedly states he simply was trying to protect America and did not take his attack on Iraq lightly but rather held it in deep prayer, while videos play in the background displaying the terrible toll on the lives of Iraqi citizens. “It’s the price one pays for victory,” claims Bush, with the prosecutor responding, “No, it was the price the innocent paid with their lives.”

A narrator, played by Mahira Kakkar, reminds the audience and a jury of eight audience members (who are selected each night and ultimately decide the fate of Bush), what led to the war in Iraq. There was such a rush to attack Iraq after 9/11, some questioned why the Bush administration couldn’t wait until those investigating determined whether Saddam Hussein was actually developing weapons of mass destruction as the Bush administration claimed. Fifteen members of the Security Council agreed to allow Iraq the opportunity to disarm any hidden weapons or face serious consequences. However, Bush, as it turns out, pressed for military intervention, setting off his attack against Iraq before the investigation was completed based on faulty evidence. Bush’s rationale for his war on Iraq was that Saddam Hussein was developing weapons of mass destruction, committing human rights violations, allowing terrorism and in defiance of United Nations demands to comply with their international obligations. Bush insisted Iraq needed to be under a democracy. In fact, accusations of faulty evidence became the focal point of those critical of Bush’s engagement in war, especially after the Central Intelligence Agency and other intelligence agencies could find no evidence of links to al-Qaida or Iraqi weaponry as claimed by the Bush administration. Failure to find evidence of Iraqi weapons after the U.S. invasion led to worldwide controversy that both the Bush and Blair administrations had deliberately manipulated and misstated intelligence to