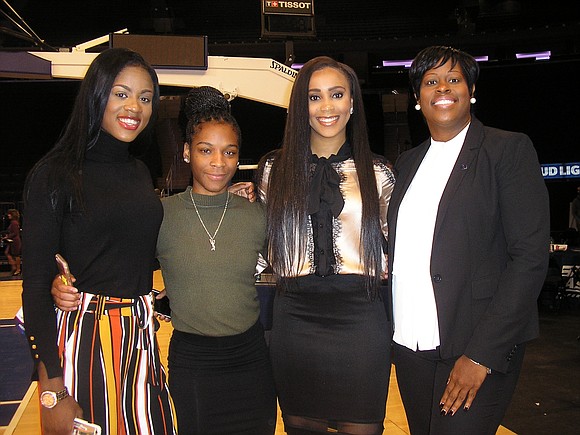 This season is the 35th season of women’s basketball in the Big East Conference. The teams gathered at Madison Square Garden Tuesday to discuss their expectations for the months ahead. For the two teams from the New York/New Jersey area, St. John’s University and Seton Hall University, aspirations are high.

“We have a lot of new players on the team, but they’re learning the system—what we do, how we play,” said Seton Hall senior post player Lubirdia Gordon, who has played a role in the Pirates’ transition from a losing program to back-to-back NCAA Tournament appearances. “It’s very satisfying to start a new tradition. You can’t ask for anything better.”

This year’s Seton Hall team includes eight freshmen (one a red shirt) as well as red shirt junior, JaQuan Jackson, a transfer from Louisiana Tech, for whom coach Tony Bozzella has high hopes. Jackson said she is “overly excited” to get back to playing and plans to be a valuable contributor.

“We’re going to be a much more balanced team this year than we have in the past,” said Bozzella. In the recent years, high-profile players such as Tabatha Richardson-Smith and Ka-Deidre Simmons were dominant figures. “Our depth will really help us be successful. The past couple of years, we haven’t had as much bench strength as we have this year. That will help us as far as really gelling and playing well together.”

St. John’s is without one of the greatest players in Red Storm history, Aliyyah Hanford, as well as the talented Danaejah Grant, both of whom graduated and are now playing professionally. Seniors Aaliyah Lewis, Sandra Udobi and Jade Walker promise to step up and lead.

“Continue to do my best work,” said guard Lewis. “I have to be on my A game all the time because I have to set the tone. I’m ready. [With the four freshmen] I’m constantly talking and being vocal during practice. Let them know I’ve got their backs and I’ll help them learn the game.”

“Let my leadership radiate on the rest of the players,” said forward Walker. “Help everybody adjust. Just try to be the best teammate I can be this whole year. We’re definitely excited off of our Big East Championship win. We’re not going to let that blindside us from the work that we have to do.”