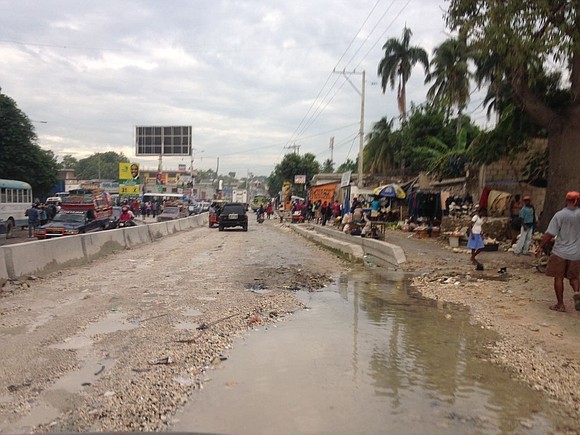 At least 271 people have been killed since Matthew made landfall in Haiti as a Category 4 hurricane, and officials in the country warn that the death toll is only likely to rise. Dave Brodsky is President of the Chanje Movement in Leogane. Dave Brodsky/WhatsApp

Now that Hurricane Matthew, one of the deadliest storms to have roared through the Caribbean and the U.S. in more than a decade, has made landfall in Florida, relief officials at the Caribbean’s main response agency are getting ready to roll out assistance efforts to member countries lashed by the storm.

The Caribbean Disaster Emergency Management Agency said on the weekend that a number of rapid response teams it had placed at various corners of the 15-nation trade bloc to move in once things cleared up were headed to Haiti and other countries banged up by Matthew.

Up to the weekend, the storm had killed more than 480 people, most of them in Haiti, perennially reputed to be the hemisphere’s most impoverished country.

Officials at the Barbados-based agency said they would most likely focus most of their attention on Haiti, where thousands of its not so sturdy homes were flattened as Matthew, packing winds in excess of 130 miles per hour, roared through Hispaniola, the relatively large island Haiti shares with the Dominican Republic.

“CDEMA continues to receive regular situation reports from Haiti as well as updates from the Bahamas and Turks and Caicos Islands, which were also threatened by Mathew,” said Director Ronald Jackson. “The Regional Coordination Plan remains activated.”

“The overall aim is to ensure that relief and response support is provided to the impacted state shortly after the all-clear has been given,” agency spokeswoman Joanne Persad said. “The targeted time of providing the support is within three days of the all-clear. CDEMA along with its partners stand ready to provide assistance to any of its participating states upon their request.”

In one province alone, Haitian officials said that up to 30,000 homes were destroyed, and 50 people were killed in the small town of Roche-a-Bateau. More than 10,000 who sought refuge in shelters are likely to remain there for some time officials said.

The U.N.’s World Food Program has already said it will provide relief to Haiti and has put the death toll at up to 500, while suggesting that the situation would become clearer this week.

Matthew had caused damage in a number of Caribbean countries, starting with Barbados and Antigua in the Eastern Caribbean, brushing the Turks and Caicos Islands, Jamaica where major flooding and damage to highways were reported, and the Bahamas, where officials in a number of the Family Islands said major damage had occurred. The Dominican Republic also suffered infrastructural damage as well as five deaths. A landslide buried a teenager in St. Vincent.

Rescue teams in Haiti blamed a collapsed bridge linking the capital with the southern districts for the delay in reaching those areas. Cabinet officials said many who had not heeded warnings about the wrath of the storm died as a result.

In the Bahamas, Grand Bahama Island suffered major damage to homes as the storm lashed the island late Thursday into Friday.

September and October is usually the peak season for powerful annual storms. The season starts in June and officially wraps up at the end of November, but December storms have not been uncommon in recent years.