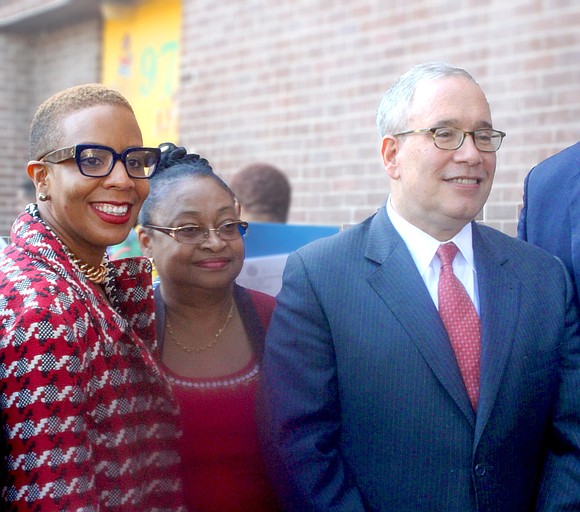 The Fort Greene Council held a celebration of their victory in the fight to preserve their most precious service centers, Grace Agard Harewood Senior Center and The Young Minds Day Care Center, after a yearlong battle over the lease of the property.

The Fort Greene Council operates 13 service centers in Brooklyn, but the Grace Agard Harewood Senior Center and The Young Minds Day Care Center, at 966 and 972 Fulton St., are the epicenter of the community in gentrified Fort Greene. They are the oldest African-American senior and child care facilities in New York and serve as the headquarters to several other centers operated by the Fort Greene Council.

After 44 years the service centers were at risk of losing the property when the city and landlord had a dispute over the lease. In fact, a sign was placed on the property that read “building for lease.” The sign remained there for an entire year before elected officials such as NYC Council Member Laurie A. Cumbo pushed for both parties to come to an agreement.

“Under no circumstances was I going to come back and tell the members of this center that I could not save this center,” said Cumbo at an event held Friday to celebrate their victory. She continued, “This was very important to me. At some point you have to draw a line in the sand and say hands off of our community.”

The situation illustrates a reality that the Black community in Brooklyn knows too well. As Brooklyn gentrifies, a disagreement over a lease can cause Black business owners to lose their property without any regard to those affected.

“Gentrification represents displacement and serves as another form of institutional racism,” said Sam Pinn, chairmen of the board of the Fort Greene Council. Pinn explained, “Europeans move in and change the neighborhood. They cater to their culture’s habits, not the habits of African-Americans.”

With historical neighborhoods such as Fort Greene and Clinton Hill changing rapidly, Black-owned service centers are extremely vital to the community. The Grace Agard Harewood Senior Center and The Young Minds Day Care Center offer numerous fitness, educational and recreational programs for the young and old.

Betty Perry is a member of the senior center and has been a part of the program since 1993. “This is the best thing that has ever happened to me,” said Perry, who is 85 years old. “When you sit home you worry about the things you didn’t do. Here, we get to go on trips, celebrate with other centers. It’s just great.”

“What all the elected officials in this neighborhood are about is breaking poverty and empowering this community,” said James, the first African-American woman to hold citywide office. “Today we celebrate and tomorrow we keep on fighting in City Hall.”

The Fort Greene Council has signed a new lease with the city that will last another 10 years, a great outcome of this long battle. But the neighborhood that is home to the center is changing, with little legislation to protect African-American businesses. The landlord, who has been a supporter in this case, could have received three times more than what he currently gets in rent from the city agencies that fund the centers.

“The government responds when we come together and compel them to respond,” said Adams. “This is ground zero for gentrification. We need to dig in and make sure longtime residents have an opportunity to stay here and use this space as a safe space and continue to thrive and grow. We need to make sure that when new schools open our children have access to those schools and affordable housing zoning changes benefit the community. We are not going anywhere—this is our home.”