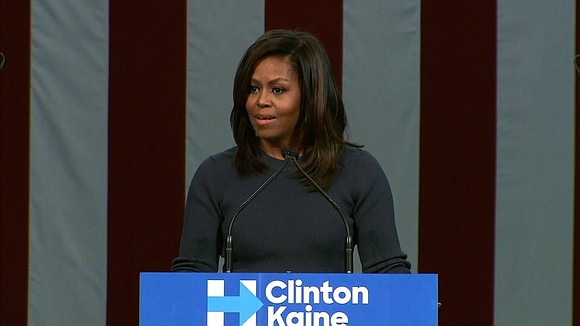 Speaking at a rally for Hillary Clinton in Manchester, New Hampshire, Obama lit into Trump over a video that surfaced last week in which he can be heard talking about being sexually aggressive with women.

"I can't believe I'm saying a candidate for president of the United States has bragged about sexually assaulting women," Obama said.

The speech was an uncharacteristically direct attack from the first lady, who said she eschewed her "normal campaign speech" because it would have been "dishonest and disingenuous to me to just move on to the next thing like this was all just a bad dream."

The first lady never addressed Trump by name, referring to him only as a "candidate." She began the speech by reflecting on what she called a "rough week in an already rough election."

Obama lamented the "hurtful, hateful language about women" throughout the campaign, saying it was "painful" to those who expected leaders should meet "basic standards of human decency."

Her voice quivered as she recalled a meeting with young women at the White House on Tuesday.

"I told them they deserve to be treated with dignity and respect," Obama said. "I wanted them to understand that the measure of any society is how it treats women and girls."

Obama said the comments made by Trump in the video, which was recorded in 2005, had left her "shaken."

"I can't stop thinking about this," she said. "It has shaken me to my core in a way I could not have predicted."

She added: "I know this is a campaign but this isn't about politics. It's about basic human decency."

In the 2005 video, Trump can be heard describing in graphic terms how he uses his star power to force himself upon women. Since the footage was published last week by The Washington Post, several women have come forward to say that Trump had touched them inappropriately. Trump has denied those allegations, and has dismissed the remarks made in the video as "locker room talk."

At the rally on Thursday, Obama rejected that explanation.

"This was not just a lewd conversation," she said. "This wasn't just locker room banter. This was a powerful individual speaking freely and openly about sexually predatory behavior, and actually bragging about kissing and groping women, using language so obscene that many of us were worried about our children hearing it when we turned on the TV."

Referring to the spate of allegations levied against Trump, Obama said "it now seems very clear that this wasn't an isolated incident."

Obama also cautioned against a "protest vote" and urged the supporters gathered to do "everything possible to elect Hillary Clinton."