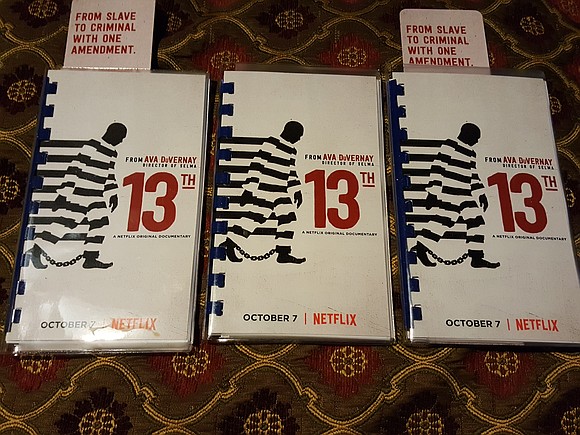 The New York Film Festival’s opening night is considered to be the world’s most prestigious celebration of cinema, and the AmNews was part of a very select group of journalists invited to celebrate, mix and mingle.

The party was held at the legendary Tavern on the Green to honor Ava DuVernay’s explosive and eye-opening documentary, “13th,” the first ever documentary to open the NYFF.

The swanky venue was packed, which meant that we were elbow-to-elbow with celebrities, movers-and-shakers, influencers and the best-of-the-best of new storytellers.

Before brother Common performed, we chatted about the importance of voting and truly understanding what the documentary is showcasing in the “loophole” that is modern

slavery in this country.

The 13th Amendment states, “Neither slavery nor involuntary servitude, except as a punishment for crime whereof the party shall have been duly convicted, shall exist

within the United States...”

The sobering truth is that 1 out of 4 people with “their hands on bars”—in the world—are in the United States of America, the alleged “home of the free.”

At the party, at every table, was a copy of The Constitution of the United States and a bookmark that sums up the intelligent documentary like this: “From Slave to Criminal with One Amendment. The Loophole That Changed History.” Further down were the details sharing that the documentary is available on Netflix starting Oct. 17 and providing the Twitter handle,

Just before Common jumped onto the stage, he and I had that “party moment” that if captured for a movie, the camera would be placed on a track, moving through the crowd like a party observer, stopping just before the bustling mass of well-dressed folks moved to reveal the performance stage.

“Common, do you want one of these? “I asked, handing him a copy of the aforementioned, neatly packaged Constitution of the United States and bookmark. He reached out, and then he hesitated and smiled. Here the editor would cut to a medium close-up and linger to catch the silent dialogue being delivered by his piercing eyes.

Common: “No. You keep it. I am sure you that I can always get one later.”

Cut to a wide shot as the camera pulls back, tracking him through the parting crowd as he jumps onto the stage, which is just what happened.

Meanwhile, Williams talked about his short, which is part of NYFF short programs and his current project, under the convergence banner, “Traveling While Black,” which he co-created with Bonnie Nelson Schwartz, Lina Srivastava and Yasmin Elayat.

“Traveling While Black” is about the “Green Book” (published in 1936), which became an essential tool for African-American travelers. The book consisted of a coast-to-coast listing of bars, hotels and other businesses that were Black-friendly in the age of Jim Crow. “Traveling While Black” presents a contemporary exploration of the issues related to restricted movement in modern-day America, with a suite of experiences including a traveling museum exhibit, virtual

Williams, who calls NYC home, got his start in TV journalism, working at ABC, NBC, CNN and Comedy Central. A Sundance Channel gig—covering the film festival—sparked a desire to pursue documentary filmmaking. With $5,000 in the bank, he quit his day job and made “Music by Prudence.” It won him the 2010 Academy Award for documentary short. With the success of his first feature, “God Loves Uganda,” the rest is history.

Williams was recently elected (2016-17) to the Academy of Motion Picture Arts and Sciences Board of Governors, under the Documentary Branch, one of the Academy’s 17 branches, which are each represented by three governors, who may serve up to three consecutive three-year terms. Another African-American elected is Sharen K. Davis under the Costume