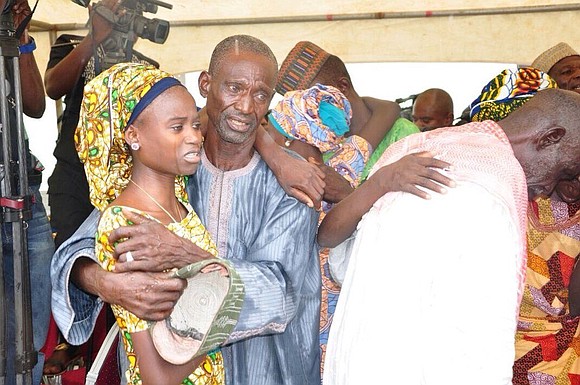 In a sight that could make a witness choke up with tears, a roomful of rescued Nigerian schoolgirls from Chibok ran into the arms of their overjoyed parents and smothered them with hugs. The gathering, organized by Nigerian authorities, signaled an end to their two-year captivity by Boko Haram rebels and the start of a new life.

Their nightmare of imprisonment in the Sambisa forest of Nigeria since April 2014 is over.

One of the girls told of surviving for 40 days without food and how they narrowly escaped death at least once.

“We had no food for one month and 10 days, but we did not die,” said one of the girls, speaking in the local Hausa language. “We thank God.”

However, of the more than 200 kidnapped students, 197 are still missing.

Many of the kidnapped students were Christian but had been forcibly converted to Islam during captivity. The shapeless gray chadors imposed by their captors were now replaced on their thin frames by colorful dresses and hair ties.

The girls, freed last Thursday, met their excited relatives, some of whom had trekked for days to reach the capital, Abuja. Nigeria’s vice president, Yemi Osinbajo, witnessed the handover.

The release followed negotiations between Nigeria’s government and Boko Haram brokered by Red Cross and Swiss officials, a spokesman for the country’s president said.

“We thank God,” said one parent. “I never thought I was going to see my daughter again, but here she is ... Those who are still out there, may God reunite them with their parents.”

Nigerian authorities denied that captured Boko Haram fighters were swapped for the girls, although one security official told the BBC that four commanders had been freed.  A “handsome ransom,” in the millions of dollars, was reportedly paid by the Swiss government on behalf of the Nigerian government.

After two years in captivity and being married off to Boko Haram fighters, several girls carried children, even though they were hardly more than children themselves.

The plight of the girls never left the radar for an active diaspora community and their friends and colleagues around the world. Twitter hashtags such as #BringBackOurGirls and #chibok and #HopeEndures were updated, demonstrations were held, politicians were lobbied and letters were penned.

Osinbajo told the group, “We are also going to see to it that everything you require going forward, perhaps your education, those who need to go back to school, those who need to find employment, we are going to make that we make all the provisions for you.

“So we are all very excited that you are here. We are all happy that God has preserved your lives and brought you back.”

The reunion video can be seen on www.oak.tv.