Haiti in need of real help 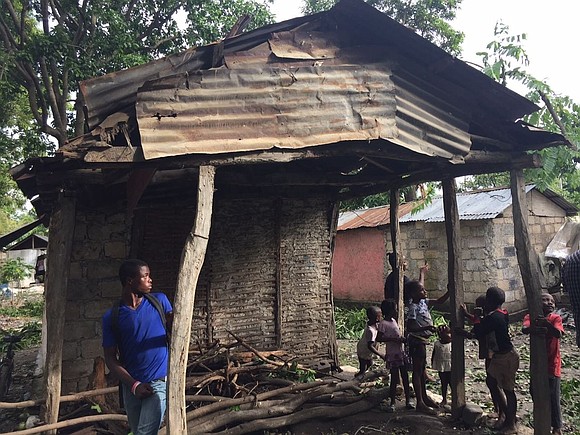 At least 271 people have been killed since Matthew made landfall in Haiti as a Category 4 hurricane, and officials in the country warn that the death toll is only likely to rise. Dave Brodsky is President of the Chanje Movement in Leogane. Dave Brodsky/CNN photo

A little more than two weeks after Hurricane Matthew tore through Haiti—killing more than 800 people, displacing thousands more and reviving the threat of cholera—some Haitian-Americans are avoiding donating to the American Red Cross. Instead, they’re taking action into their own hands.

After the 2010 earthquake, which claimed more than 100,000 lives, the American Red Cross raised $500 million and promised to help the country rebuild. An investigative report by NPR and ProPublica found that $125 million was spent for administrative fees and that only six permanent homes were built as a result.

Tamika Mallory, a prominent activist and member of Justice League NYC, said that there is a significant amount of distrust between the ARC and Haitian-American communities.

“How much of these resources are actually getting to the communities?” Mallory questioned. “We know that with most NGOs a major portion of what they’re given is set aside for administrative costs and not for resources on the ground. Folks who are the unseen and unheard members of the community are ignored. The best way is to give the money to those communities on the ground.”

Carlo Thertus founded his charity, the Haiti Relief Fund, back in 2004 after Hurricane Jeanne specifically because he believes “fundraising for Haitians should be done by Haitians.”

Thertus said he was astonished to learn how little work organizations such as the ARC or Yele Haiti had done in Haiti after the earthquake.

“The Red Cross really messed up. If you raise for a cause, it should be spent for that cause,” said Thertus. “They don’t have an interest in Haiti. It’s Haitians who have to take care of Haiti. That type of money doesn’t come all the time.

“If I had half of the money the Red Cross had, I could rebuild a capital,” he continued.

The Haiti Relief Fund provides humanitarian relief through a network of volunteers and some paid staffers. After the earthquake, Thertus decided to focus on health care and education, sending water purification tablets to Haiti before the reemergence of cholera and building a school in the southern part of the country.

“I worked like a donkey,” said Thertus, who currently lives in New York. “They love it and I love it.”

Thertus said that besides stipends and bare-bones administrative fees, all the money raised is put toward efforts in Haiti.

Whenever anyone asks about his work, Thertus frequently points to his YouTube channel, which has more than 250 videos showcasing the Haiti Relief Funds.

“In this day and age, people need to see what we’re doing,” he said.

But the Haiti Relief Fund, like other small organizations, has its limitations.

Thertus was planning to send five barrels of school supplies, but members of the community have told him that the roof of the school, which is made of tin metal, is now gone.

Thertus, though, remains hopeful. The Haiti Relief Fund founder said that he plans to dispatch a volunteer to survey the damage.

The Caribbean American Center of New York is raising money for Haiti as well. The organization, in partnership with the Kindest Hearts Foundation, is heading out to Haiti at the end of the month with nine of its members to hand out supplies to those in need.