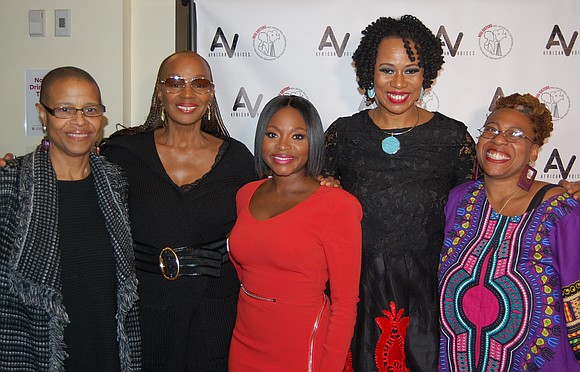 Reel Sisters of the Diaspora Film Festival & Lecture Series will present more than 40 films that are guaranteed to inspire, uplift and spark conversations among family and friends. The festival will be held Oct. 22-23, 2016 at LIU’s Brooklyn campus, at Flatbush and DeKalb avenues. Screenings will take place in the Salena Gallery’s screening rooms. For schedule and tickets, visit reelsisters.org or call 347-534-3304/212-865-2982.

Reel Sisters recently kicked off the festival at the Schomburg Center in Harlem with a moving tribute to media pioneer Cathy Hughes, founder of Radio One/TV One, and Naturi Naughton, award-winning actress noted for her role as Tasha St. Patrick in the hit Starz drama “Power.” Kim Coles, the mistress of ceremonies, performed an excerpt from her one-woman show in tribute to the honorees. Vocalists Kimberly Nichole (“The Voice”) and Meli’sa Morgan gave stirring performances. The festival continues this weekend in Brooklyn, where 40 films will be showcased. For the schedule, visit reelsisters.org or call 347-534-3304/212-865-2982.

“There would have been no liberation had it not been for Black media,” said Hughes. “Black media is unifying force. It is an informational force. It is a motivational force, but more importantly than anything else, it is the only vehicle we have that can tell our story from our perspective and get it right. It is not any other culture’s responsibility to tell our story.”

Film lovers can join the festivities this weekend in Brooklyn, where a wide range of exciting and powerful films will be showcased.

Some of the notable films screening this year include “Amenze: In Between Worlds” (Trailer: https://vimeo.com/148269413), about a sex worker who reclaims her real identity in Brazil; “Til Death” (Trailer: https://youtu.be/HIve6Ny0x7o), the story of two orphaned Liverpool girls who form a life bond; and “Fanny Pack,” a comedy about a young Indian-American woman who clashes with her fanny pack wearing dad in an airport. Some documentaries in the lineup are “Soul City” (Trailer: https://vimeo.com/166083635), an inspiring story of civil rights activists who build a Black town in the 1970s; “Queen Nanny: Legendary Maroon Chieftainess” documents an 18th century heroine who defeated the British in Jamaica’s fight for independence; “Holding History: The Collections of Charles L. Blockson” (Trailer: https://www.youtube.com/watch?v=-VXcHJPbd00), a scholar’s story of preserving one of the largest collections of historical books and artifacts by people of African descent; and “PLUS!” (Trailer: https://vimeo.com/127557333), five plus-sized models challenge the fashion industry to recognize that 65 percent of American women are a size 14 or larger.

Film lovers can take a break from a day of film viewing to enjoy the festival’s lecture series panel. Saturday, Oct. 22, at 3:45 p.m., Moikgantsi Kgama, founder of Imagenation Cinema Foundation, will moderate “Women Owned Production Panels,” a conversation with industry professionals who are producing their own film and media content. From Oprah to Viola Davis, women of color are taking their destiny in their own hands by launching production companies. Guests are Tracey Baker-Simmons, CEO of HWY58MEDIA; Rochelle Brown, executive producer/principal of Powerhouse Productions; and Barbara Bullard, founder of B-Bullard, LLC.

Sunday, Oct. 23, at 2:06 p.m., Reel Sisters will host #FilmAFeatureIn8Days: Microbudget Filmmaking with Nicole Franklin, the director of “TITLE VII,” a microbudget film shot in eight days. The award-winning filmmaker is a career documentarian who also produced a number of narrative shorts after the feature documentary that launched her career. She will share the essentials of producing and directing an affordable feature film heading into distribution. The workshop is free and open to the public.

Reel Sisters Film Festival offers affordable ticket prices. A one-day pass is $20 and a section pass is $10. Purchase tickets at the website www.reelsisters.org.