No happy warriors to be found at Al Smith dinner 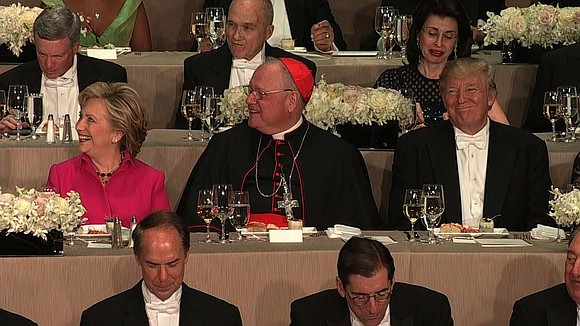 WASHINGTON (CNN) -- No one would confuse Donald Trump and Hillary Clinton for happy warriors.

The rivals showed up Thursday night at a fabled staging post on the final stretch of presidential campaigns -- the Al Smith charity dinner in New York.

Smith, the former New York governor and 1928 Democratic presidential nominee, was once dubbed the "happy warrior of the political battlefield" by Franklin Roosevelt.

But Trump and Clinton looked anything but happy when they limped off the 2016 campaign trail Thursday night.

They struggled to disguise the anger, bitterness and sheer open dislike that has pulsed through their recriminatory White House race, perhaps not surprisingly since he has threatened to throw her in jail and she says he's a threat to the republic.

An evening known for sharp humor that often goes right up to the line but rarely crosses it quickly degenerated into an uncomfortable experience. They just imported the acrimony of Wednesday night's debate to a new venue.

In short, the evening became an apt metaphor for the campaign.

Neither candidate seemed at ease or performed particularly well -- after all, they are the most unpopular presidential hopefuls in recorded history.

But in the end, Trump seemed to come across as the more unacceptable -- and appeared to misjudge the tone of the evening worse than Clinton.

"Donald had some very solid minutes early on and eventually he crossed the line and took it a little too far," Al Smith V, whose family hosts the dinner, said in an interview on CNN's "New Day" on Friday. "Hillary, on the other hand, was able to laugh at herself and at the same time not underplay any of the serious things Donald Trump has said or done,"

And everyone in attendance seemed to just want it to be over, much as the nation seems desperate to rid itself of the ugliest presidential race in decades.

Thursday's dinner was notable because it lacked the genuine respect and even warmth that President Barack Obama and Republican nominee Mitt Romney showed when paying tribute to one another's families at the same event four years ago -- after throwing their jabs.

Political humor works best when there is at least some respect between the parties and everyone is in on the joke. It's especially important for the person doing the roasting to also turn the humor on themselves, otherwise the barbs can come across as too harsh.

Obama and President George W. Bush proved themselves to be particularly adept at this.

But Trump clearly didn't get the memo. Some of his jokes did hit the spot but many just seemed a little too cutting for the venue.

"We've learned so much from WikiLeaks. For example, Hillary believes that it is vital to deceive the people by having one public policy and a totally different policy in private," Trump said, drawing boos --- which are unheard of at this annual event.

Trump said, "That's OK, I don't know who they're angry at, Hillary, you or I. For example, here she is tonight, in public, pretending not to hate Catholics."