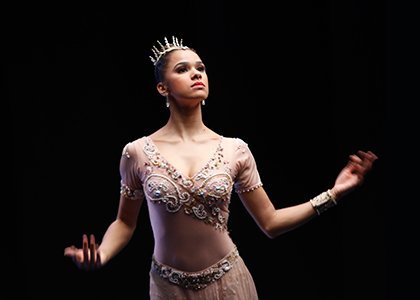 Misty Copeland’s performance at American Ballet Theatre’s fall 2016 Gala Thursday, Oct. 20, was a delightful display of classical ballet at its most technically challenging and musically responsive.

Copeland was one of six dancers in Sir Frederick Ashton’s “Symphonic Variations” which, unlike last season’s “Firebird,” “Swan Lake” or “Romeo and Juliet,” is an 18-minute marathon highlighting not plot, characters or scenery but classical ballet, plain and simple and simply beautiful. Onstage throughout the entire ballet, Copeland crisply executed ballet’s building blocks—arabesques, attitudes, développés and port de bras—with the dispassionate precision the dance required. In addition to her display of style and stamina, the dance resonated on other levels. When it premiered in 1948, “Symphonic Variations” featured two legendary ballerinas, Margot Fonteyn and Moira Shearer, whose careers Copeland echoes. Her dramatic ability and musicality at times recall the legendary Fonteyn. Copeland’s career trajectory seems capable of mirroring the trajectory of Shearer, who starred in the 1940s motion picture classic “The Red Shoes,” a film that prompted generations of young girls to dream of becoming ballerinas.

In fact, while it’s anybody’s guess as to just how many Misty-inspired Black and Brown youth were among the 150-plus JKO School students, Studio Company members and apprentices onstage for the gala’s opening piece, it’s a safe bet there were a few. The event’s emcees, ABT principal dancers Gillian Murphy and Marcelo Gomes, even mentioned ABT’s diversity initiative and the Copeland-championed Project Plié in their opening remarks. It’s no secret that Copeland’s contributions have resulted in a more diverse audience at ABT performances as folks flock to see the ballerina who shattered the glass ceiling in one of the country’s two major ballet companies.

A day before ABT’s fall season opened, Copeland still seemed to be pinching herself even while not letting grass grow beneath her feet. In response to a request to compare this season’s offering with last season’s spate of story ballets, Copeland said, “It’s a different experience for the audience. In many ways it might be easier to follow when you’re dealing with a ballet that’s telling a story the way the classical ballets do.” The fall season’s ballets tend to be more contemporary. Even if they were created decades ago, like the Ashton works, they exemplify current choreographic trends and are sometimes difficult for dancers to do and hard for audiences to follow. Copeland explained, “Ashton’s ‘Symphonic Variations’ and ‘Monotones’ are both beautiful but equally difficult and demanding for the dancer. It’s such a different style of movement … I love the way the movement complements the music and feel that the music really shines in most of Ashton’s works.”

Copeland’s excitement is also evident when talking about the world premiere of visual artist Jessica Lang’s work, “Her Notes.” “I’ve actually known Jessica for over a decade,” Copeland said. “Her movement is a way of working that’s very interesting because she’s not a classical dancer. I absolutely love it.”

This is an extraordinary time for Copeland. She is able to bask in the glow of a career that so many before her dreamed of but found unattainable because they were Black or Brown. She has also opened the eyes, hearts and minds of folks who were until now incapable of imagining ballerinas who look like her. In truth, given the country’s ever-changing demographic, this is a win-win for ballet dancers, companies and audiences.

In addition to fulfilling her ballet dream, a host of opportunities are coming her way. Of course, Copeland’s manager and publicist Gilda Squire says that when she’s in the studio or onstage it’s all about her first love—ballet. Still, with a remarkable combination of drive, energy and business savvy, this woman is not resting on her laurels. (Of course, no one gets anywhere in a career as demanding as ballet by resting on their laurels.)

A glimpse of what Copeland has done since being promoted to principal as well as what’s in store for her is mind-boggling. In 2014 there was a biography, “A Life in Motion: An Unlikely Ballerina.” Last year, there was the movie “A Ballerina’s Tale,” the children’s book “Firebird,” the Broadway appearance in the musical “On the Town,” the Misty-inspired Barbie Doll, the launch of a dance-wear line and more.

More recently, July 31, Copeland married sweetheart Olu Evans. Sandwiched between ABT’s Los Angeles and Paris performances and the current New York season, she guest starred on PBS KIDS’ Emmy-winning series “Peg + Cat” and appeared in photographer Gregg Delman’s newly released book, “Misty Copeland.” She even took the time to answer social media Photoshop rumors, saying, “No altering was done to my body. I’m happy and proud of my body and would never participate in changing it.” In addition, Seiko is issuing a “very limited edition Misty Copeland watch that is pink and decorated with a tiara design.” Misty is also preparing to make a State Department-sponsored trip to Cuba, where she’ll meet the legendary ballerina and Ballet Nacional de Cuba founder Alicia Alonso and teach master classes at the company school. She is also slated to guest star in “Romeo and Juliet” with Italy’s famed La Scala Ballet. As if that isn’t enough, Misty excitedly announced that in November she and one of ABT’s outstanding African-American male dancers, the elegant, charismatic long-limbed Calvin Royal III, will perform “Cinderella” in Houston, Texas, with the Open World Dance Foundation.

On top of it all, Copeland still finds time to talk to aspiring young dancers about overcoming the odds and pushing through adversity to achieve a dream. She commented on the fact that this talk about diversity in ballet has not died down.

Copeland explained, “I don’t want to see it die down. I want to do something that makes it relevant. It’s so important. It’s not something that’s going to change because one year we have all these things happening. These conversations and doing this work helps create change. I’ve been asked if it annoys me to be always referred to as an African-American ballerina. No, you’re still at that point where we have to be reminded. It can’t be pushed aside.” She is right.

As ABT’s brief season at Lincoln Center’s David Koch Theater winds down, you can still see Misty Copeland perform. She is slated to dance in Jessica Lang’s “Her Notes” Oct. 28 and in Ashton’s “Monotones I and II,” Saturday, Oct. 29, matinee (2 p.m.) and evening (8 p.m.), and in “Symphonic Variations,” Sunday, Oct. 30.