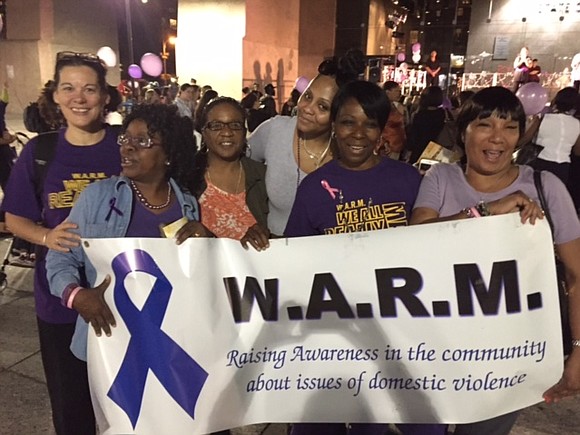 The Harlem-based nonprofit organization, We All Really Matter, is holding their seventh annual Domestic Violence Forum, “Bridging the Gap,” to bring awareness to the growing epidemic during Domestic Violence Awareness Month.

Every nine seconds in the U.S. a woman is assaulted or beaten. According to the National Coalition for Domestic Violence, an average of 20 people is physically abused by intimate partners every minute, equating to more than 10 million abuse victims annually.

Violence against women is perpetuated in many aspects of culture. Domestic violence cases are harder to prosecute because they usually occur in private, with no witnesses to the crime.

“Violence against women is an epidemic is the United States,” said Stephanie McGraw, founder of W.A.R.M. “It affects all of us, even if you are not a victim of it yourself, it could be your daughter, mother, sister, and it trickles down to the entire community.”

“We All Really Matter has been around for seven years, way before Black Lives Matter, but domestic violence has not always received the same recognition in the media and it definitely gets lost in the Black community,” McGraw continued. “W.A.R.M. aims at bringing attention to this problem and aiding men and women who are going through abusive relationships.”

Statistics show men who as children witnessed their parents’ domestic violence are twice as likely to abuse their own wives as men of nonviolent parents. Men are also less likely to seek help for issues regarding domestic abuse. Women are hesitant to seek help for various reasons. According to domestic violence statistics, between 55 percent and 95 percent of women who had been physically abused by their partners had never contacted non-governmental organizations, shelters or the police for help.

“Women stay in these relationships for a long list of reasons—keeping family together, fear and it could also be for financial reasons,” said Brenda McLaughlin, a 13-year survivor of domestic abuse and a member of W.A.R.M. “You can try to help as many women as you can, but only she will know when she’s had enough. That’s when healing process starts.”

W.A.R.M.’s purpose is to begin healing for victims and help those affected by this growing epidemic. The organization offers support groups, guidance, referral to emergency shelters, meditation and self-esteem workshops. They also provide an abundance of resources and help victims find permanent homes. But what makes W.A.R.M. unique is their focus on healing. W.A.R.M. enacted a healing garden, which uses the Earth to help victims recreate themselves and start new lives.

“W.A.R.M. tries to focus on holistic healing to help victims overcome their abusive relationships,” said McLaughlin. “W.A.R.M. welcomes everyone, men and women. Stephanie is always available and open to those seeking help.”

“Bridging the Gap” will also include a panel of survivors, doctors, lawyers and women. “Bridging the Gap” is open to anyone at any stage of the healing process. The event is also a way to look at a more holistic approach of life after abuse. “There are different coping mechanisms, healing ingredients that make up the process,” said Leslie Williams, a “thriver” and one of the panelists who will be speaking at the event. “Everyone goes at their own pace.” Williams is the author of “How to Love a Formally Abused Person” and has interviewed dozens of domestic violence victims on overcoming the abuse. “Stephanie and W.A.R.M. have made a platform for men and women to come, share, grow and learn to feel empowered,” said Williams.

Ongoing support groups are offered once a month Mondays from 6 p.m. to 8 p.m. The support groups meet at 140 W.140th St. (between Lenox and Seventh avenues). at Goddard Riverside Community Center.

Annual Giving Thanks to Ourselves

Annual Unwrap the Gift Within Party

Get to the Root