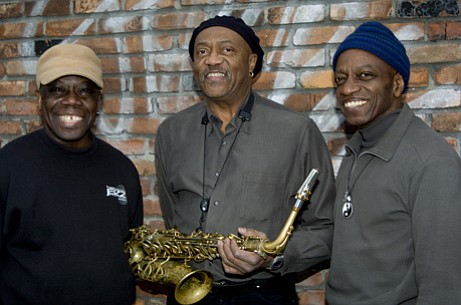 Trio 3 is a collaborative of iconic explorers and renowned bandleaders that include the bassist, composer Reggie Workman, the saxophonist, composer and arranger Oliver Lake and the drummer Andrew Cyrille, who over the past six decades have defined the music on their own terms.

As a unit, Trio 3 (celebrating 30 years together) are still in the midst of exploring new horizons and taking dips and turns throughout the jazz panorama.

“The American Slave Coast: A History of the Slave-Breeding Industry” by Ned and Constance Sublette recently won the acclaimed 2016 American Book Award. The book documents a history of the slave-breeding industry, which they define as the complex of businesses and individuals in the United States who profited from the enslavement of African-American children at birth.

On Oct. 28, at Manhattan’s Symphony Space, the book will speak through “The American Slave Coast: Live,” a performance collaboration that translates the argument of the book into a raging, riveting rhythmic concert work with two principal artists: Ned Sublette, directing the spoken language (from the book), and composer, arranger and New Orleans bandleader, alto saxophonist Donald Harrison as the music director.

It combines the storytelling intensity of the book’s history lesson with the emotional power of live instrumental music in a thought-provoking experience that respects the gravity, complexity and social urgency of the book’s subject.

“The book made me realize every time we think of African-American it’s negative, but what they had to endure as slaves and to be able to overcome the most horrendous treatment in American history is phenomenal,” said Harrison. “Through this music we want to change the psyche of how we see each other. Those that endured slavery should be honored, not disrespected.”

Zora Neale Hurston, the renowned novelist, folklorist and anthropologist wasn’t the only female participant during the Harlem Renaissance, but she was the most vocal and proved to be the most controversial among her writing peers.

There were occasions when she openly spoke out against the novelist Richard Wright and although she and Langston Hughes were dear friends, they experienced rocky times.

“Life is tears and laughter, and through it all I’ve been faithful and faithless,” stated Hurston. She was an independent woman who was never known to be bashful.

Regardless of what production arrives this season, there will be none better, thanks to the phenomenal performance of Elizabeth Van Dyke as Hurston. Van Dyke encompasses the heart and soul of her character. You smile when she is witty and sassy, or feel the tension as she speaks out in protest or quarrels with Hughes.

Van Dyke is brilliantly supported by Joseph Lewis Edwards, who convincingly captures the essence of his three characters: Langston Hughes, Richard Wright and Alain Locke, the writer, philosopher, professor and chairman of Philosophy Department of Howard University, and given credit in some circles as the “dean of the Harlem Renaissance.”

Edwards brings a distinct personality to each character from the even tempered and sometimes jovial Hughes to the intellectual snobbishness of Locke. Appearing on the stage intermittently, his timing is perfect. Like a jazz duet their interactive flow is intuitive. Van Dyke, who stays on the stage throughout is the anchor, like a John Coltrane solo, she is flawless.

The play takes place in 1949 on Christmas Eve in a New York City bus station. Hurston has just purchased a ticket and is awaiting a bus to her Florida destination.

While waiting, Hurston takes us through the valley of her intensified life. As her books such as “Their Eyes Were Watching God” inform us, no one could tell a better story as a folklorist.

She began with her days in Florida and swiftly moves to being a student at Howard University, where she meets Hughes, and then to New York to attend Barnard College, where she was the only Black student.

Van Dyke becomes an explosive keg as she recalls Hurston being falsely accused of molesting a 10-year-old boy. That scene is sheer dynamite. The audience can see the anger in her tears, hear her agitated vocal vibrations. The outrage, the audacity to accuse a woman of such prominence.

Black productions entertain and inspire and are Black history appetizers. “Zora Neale Hurston” is at the zenith of importance and acting ability. Witnessing Van Dyke as Hurston will become one of those noted theater history moments.

The play was written by Laurence Holder and directed by Woodie King Jr., founder of the New Federal Theatre. For tickets or information, call 212-941-5800. Performances are Thursday-Saturday, 8 p.m., and Matinees are Saturday and Sunday, 2:30 p.m.