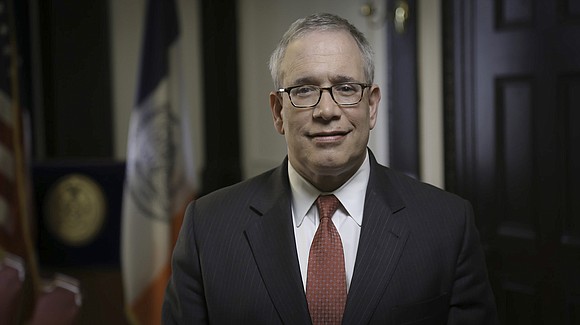 Last month, Mayor Bill de Blasio and several elected officials touted the creation of a new minority- and women-owned business enterprise office with a goal of awarding at least 30 percent of procurements to M/WBEs by 2021. However, when it comes to the city’s own share of procurement with M/WBEs, a new report by City Comptroller Scott Stringer reveals de Blasio continues to fail.

Stringer gave the city a “D+” grade for its utilization of M/WBEs. No change from 2015, when he gave the city a “D+,” and up from a “D” in 2014. Grades are based on actual spending with M/WBEs during the fiscal year, not on contracts awarded.

The third-annual report released Monday, titled “Making the Grade,” paints a grim picture of total city procurement with M/WBEs declining in Fiscal Year 2016. In the first drop in three years, only 4.8 percent of the city’s $15.3 billion annual procurement budget went to M/WBEs in FY16. 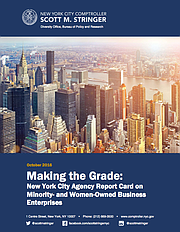 “This isn’t just about giving everyone a fair shot—it’s about our economy and about our neighborhoods,” Stringer said to the AmNews. “There are upwards of 500,000 minority-owned and 400,000 women-owned firms across the five boroughs. Yet, less than 1 percent are certified with the city.”

The report points out that the lack of procurements is contributing to unemployment for people of color who are more likely to work for M/WBEs. A survey in the report states that in Chicago, Black business owners are five times more likely to hire other Black workers than white-owned businesses.

Unemployment in the city remains the highest for Black residents at 7 percent. Barriers continue to plague M/WBEs, which in turn contributes to the city’s economic divide.

“This administration at this late date does not seem to be able to take MWBE procurement seriously,” said Bertha Lewis, founder and president of The Black Institute. “This situation is so serious and it needs to be treated separately by someone on the deputy level. You can’t keep shoving this in the basket.”

More than 3,500 certified M/WBEs, or nearly 80 percent of those certified, did not receive city dollars in the 2016 fiscal year, according to the report. There are 4,527 certified M/WBEs the city can do business with.

A review of which city agencies made use of M/WBEs over the past few years reveals that the Department of Small Business had the best overall improvement, receiving a “B,” moving up from the “F” it received in 2015. The Department of Housing Preservation and Development maintained its “A” grade and the Commission on Human Rights received a “B.”

Agencies that consistently fail in utilizing M/WBEs include the Department of Sanitation, receiving an “F” three years in a row, and the Department of Buildings and the Business Integrity Commission, both of which dropped to “F” grades.

“We have to do better,” Stringer said. “We have to be a city that delivers fairness for everyone. This is a missed opportunity, and it’s our hope that with reports like this, we can help deliver and engender real results.”

The solution? Stringer’s recommendations include creating a more comprehensive, all-inclusive M/WBE development program across all city agencies, appointing a Chief Diversity Officer who reports directly to the mayor to strengthen agency accountability and streamlining the certification process to create a universal certification application across local, state and federal M/WBE programs.