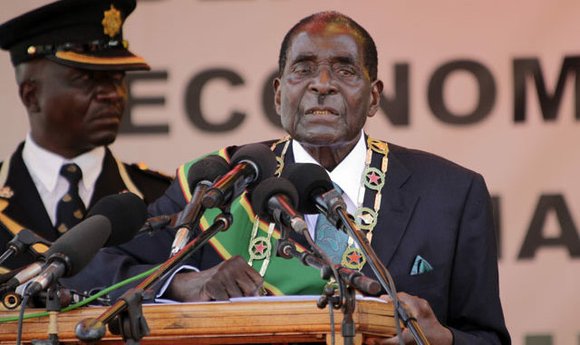 Robert G. Mugabe, president of the Republic of Zimbabwe, chairman of the Zimbabwe National Union- Patriotic Front and commander in chief of the Zimbabwe Defense Forces, is once again under attack from the West and its mercenary mouth-pieces. The latest attack has a new face and a new slogan, but an old tactic to “raise the flag” in an attempt to “destroy the flag.” A Zimbabwean pastor, Evan Mawarire, is the newest pawn in the relentless battle by the West to turn back the African revolution to “Free the Land” and be self-determining.

Again, the small land-locked country of Zimbabwe (population, 12 million), with the 92-year-old president, represents “a clear and present danger” to the national security of the Western world. Why does Mugabe strike such fear in the West? Why their dogged opposition? Do they want democracy for Zimbabwe? The forces transporting Mawarire around crying out for democratic change in Zimbabwe are the same forces that supported former dictator Ian Smith and his criminal rule over Rhodesia. Do they oppose corruption and poverty in Zimbabwe? Europeans take no responsibility for hundreds of years of African exploitation, terrorism and criminal sanctions against a developing country. After all, wasn’t it Chester Crocker, former assistant secretary of state, who said to Congress at a hearing in June 2001, “To separate the Zimbabwean people from Zanu-PF [Mugabe’s liberation party], we are going to have to make their economy scream, and I hope you, senators, have the stomach for what you have to do.” Do they believe Mugabe is too old or has been in office to long? That cannot be. The United States has defended and provided the most advanced military weapons to Saudi Arabia, where the Saudi family monarchy has ruled since 1926 without a single election and inclusive of the total denial of women’s rights. The plain truth is Mugabe is one of the greatest African leaders who has ever lived, and he participated in building and leading one of the greatest political organizations that has been produced by African people—the Zimbabwe African National Union- Patriotic Front.

There are no perfect countries, perfect people or perfect parties. However, this African country, this African party and this African leader have accomplished what no other has done to date. They fought a successful national liberation struggle for the creation of Zimbabwe and its flag. They fought and resolved an internal civil war. They reclaimed and redistributed millions of acres of land to the people of Zimbabwe from the Europeans who stole it. They have endured more than 16 years of Western sanctions with the sole purpose of “regime change” to roll back the undeniable gains of the Zimbabwe revolution. Zimbabwe’s history has been one of struggle. However, as difficult as it was to tear down Rhodesia, a government built on exploitation, terror and murder, it is more difficult to build a new Zimbabwe under the conditions of Western encirclement, determined to destroy it.

Every day, with the increasing and persistent cold-blooded murder of our people by the United States police forces with absolute impunity, we should be strengthened by the victories of our fellow Africans who dare to struggle and dare to win. They demonstrate, like the small city of Ferguson, that as small as we may be, we can cast a huge light on the real possibilities of victory in our lifetime.