Viola Plummer—A voice for the people 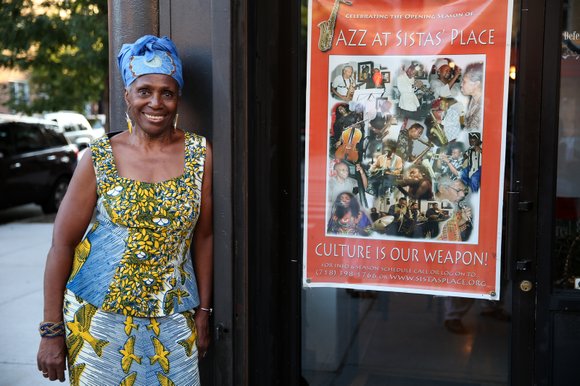 “I am a Black woman who recognizes and celebrates her African ancestry,” Viola Plummer responded to an Amsterdam News question about how she described herself. “I have faith that our people will eventually be free!”

Plummer is known to be the audacious civil rights activist in the Brooklyn community. She is also the chief of staff to Assemblyman Charles Barron.

Plummer told the paper that she has been a freedom fighter since 1954, and always believes that “our people should unite as one against our oppressors.” Grown men hang on her every word, and women clamor to hear her words of wisdom, all the while admiring her seasoned skill set and prowess.

At the age of 17, she joined the National Association for the Advancement of Colored People, after witnessing what she calls a racist unjustified act by the United Nations. “I didn’t just want to be a witness, I wanted to be a part of the movement,” she said with glaring honesty. Since then she continued to speak against racial discrimination in the Black community. She has participated in several thousand protests, rallies and victories over the years, such as successfully shutting down the “Scottsboro Boys” musical in 2009, closing down retail stores in Harlem in the honor of Malcolm X’s birthday, bringing awareness and calls for justice for U.S. political prisoners, campaigning to get rid of inexperienced Schools Chancellor Kathy Black and fighting against unchecked police brutality and the influx of drugs, guns and gentrification in the Black communities. These actions are just a few examples of the work that Plummer has engaged in.

Bringing to mind the words often attributed to fearsome abolitionist Harriet Tubman, “I freed a thousand slaves, I could have freed a thousand more if only they knew they were slaves,” Plummer told the Amsterdam News, “What change we could have if we all united in great numbers.” She believes that to effect change in our communities, we should join local organizations and participate in the movement. “You cannot expect a change when you are not a part of the solution,” she said. In fact, in 1986, as local, national and international issues brought many matters of social, economic, judicial and political injustices to a head, along with Sonny Abubadika Carson and many other eminent activists, Plummer created a civil rights organization, on Dec. 12, 1986.

The December 12th Movement’s mission was, and is, to bring awareness to Black people and solutions to the institutionalized wrongdoing by governments visited upon targeted Black communities. For years their slogans, such as “Whose streets? Our streets!” “How we gonna win? The hard way!” have spoken to their No. 1 raison d’être, that they “want all of us to unite as one so that we can fight against our oppressors.” This movement has brought the group to international conferences and meetings in countries such as Zimbabwe, South Africa, Haiti, Belgium and Venezuela. After Brooklyn-based activist Carson died in December 2002, Plummer became the head of the December 12th Movement.

The mainstream media does not note her attributes as a respected community organizer, Plummer states. Instead, they talk about her uncompromising attitude, and how she stood trial in 1985 with seven co-defendants on charges of plotting to break out of prison two members of a group of people convicted in the 1981 Brink’s armored car robbery in Rockland County, in which a guard and two cops were killed.

The group, who became infamously known as the New York 8, had faced charges that included racketeering, conspiring to commit murder, kidnapping, bank robbery and prison breaks. There was no evidence of them actually carrying out the alleged conspiracy. They were told that they had been under surveillance for approximately 2 years, and the government had said that it had reason to believe they were “planning to overthrow the government.”

The jury was made up of diverse working-class citizens. Their defense was that they were not criminals, but activists, and all of them were acquitted of the most serious charges. Plummer recalled, “Although they won the trial, some of us were given probation. I was one of the few who received probation, but they charged me for using a wrong type of ID.”

At the time, Plummer stated, “Black people who are fighting for liberation are not terrorists. ... We are eight people who were doing nothing more than organizing and fighting for freedom.”

From currently fighting aggressive home and land acquisition in New York City’s rapidly gentrifying neighborhoods, to defending President Robert Mugabe’s right to reclaim stolen land from colonizers and their descendants and encouraging President Barack Obama to lift harsh sanctions against the people of Zimbabwe, to supporting Min. Louis Farrakhan and the Nation of Islam’s fight to bolster and protect the inner city communities in the U.S., to pushing the “2016 Presidential Election: The Choice – Plebiscite, Reparations, Self Determination” campaign, the December 12th Movement has continued fighting for what they believe in. They still speak out when they see injustice in their community. And understanding that culture and art have always been a part of the people’s Civil Rights Movement, every year from September to May, they produce their popular Saturday night jazz evenings at Sistas’ Place in Bedford-Stuyvesant, Brooklyn. This cafe is also a meeting spot, where people can come and talk about the latest moves in the community.

“I am so glad that through the 62 years of being a freedom fighter, I meet people who still have the same views as me,” Plummer told the Amsterdam News. “It is important for our young people to know that you have to fight for justice, and that they, too, have a role to play in securing our rights for self-determination.”

Plummer, a grandmother 10 times over, is now in her 70s and has no desire or intention, she says, to retire “from the work that I do for our people.”