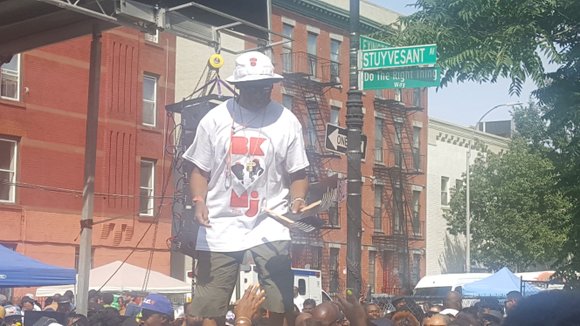 Do The Right Thing Way on Lexington Avenue and Stuyvesant Avenue in Bed-Stuy, Brooklyn was packed with hundreds of people, as film director and famous Brooklynite Spike Lee hosted a BK Loves MJ 2016 birthday party for the late singer Michael Jackson.

Hosting the big block party with TV host and radio DJ Sway, Lee delighted the growing crowd with 90s music, Jackson hits and songs that took people down memory lane, and just made everyone feel good, even as they baked in the hot Saturday afternoon sun. There was fun for everyone, including a face-painting and activity spot called Spike’s Kid Zone. The crowd was filled with parents, young people, elders and new and lifelong fans of Michael Jackson, who would have been 58 Aug, 29, 2016, if he had not died tragically on June, 25, 2009. As the crowd cheered and sang along to all the popular Michael Jackson songs, Lee and Sway handed out T-shirts and fans. Because of his celebration of Jackson in the past eight years, his events for police chocking victim Eric Garner and his celebration gathering for Prince, who died in April 2016, Lee is becoming as well-known for his big community events as he is for his big movies such as “Malcolm X” and “Do the Right Thing.”