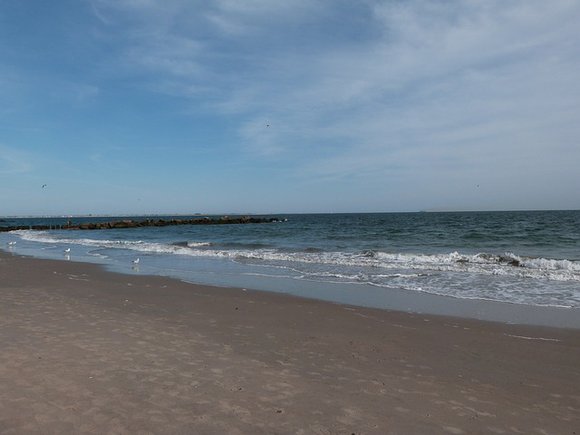 (CNN) -- Hermine picked up speed as it marched toward the East Coast, ruining the holiday weekend for some as it closed beaches as far north as New York.

Labor Day weekend plans that include a beach trip may have to change for residents living in coastal areas from Virginia to Connecticut.

Hermine's winds picked up speed on its way north, and will leave behind a mess, forecasters say.

It will regain hurricane-force winds Sunday, though it is classified as a post-tropical cyclone.

"Wind and water hazards of a variety of kinds are things we have to contend with throughout Labor Day weekend," National Hurricane Center director Rick Knabb said Saturday. "Certainly a bad weekend to be on the beach and on boats."

What you need to know about Tropical Storm Hermine

Greg and Margee Germaine were celebrating a wedding anniversary Saturday at Atlantic City, New Jersey, having cocktails on the beach and getting blasted by sand.

They said they were still enjoying their time at the shore.

"It may not be swimming weather, but it's been beautiful," Margee Germaine said despite the overcast skies and heavy surf.

The National Weather Service said the winds there Saturday afternoon were 25 mph, with gusts of 35 mph.

Elizabeth Brister, 23, saw her Labor Day weekend plans blow away in the wind.

"Right now, it's looking like we're not having much of any beach fun," she said. "I was just pelted in the face with sand and I actually have sand in my contact right now. It kind of hurts."

Masbahul Islam, a pedicab driver who has worked in Atlantic City for six years, said the Labor Day crowd is much smaller than in years past. The cancellation of two concerts due to the weather kept a lot of people away, Islam said.

A handful of people came out to the beach near the famous Steel Pier amusement park, mostly to look at the rough seas. The pier was closed Saturday.

The storm was expected to spend the next several days meandering in the Atlantic, gaining some strength.

Storm surge could be 3 to 5 feet above the ground during high tide in areas from northeastern Virginia to New Jersey through the weekend.

"At a minimum, we're going to have some beach erosion, rip currents and dangerous waves all the way from the south facing shores of New England, Cape Cod, Nantucket ... down to the Hampton Roads area," Knabb said.

"The impending weather conditions constitute an imminent hazard," he said in a statement. "This situation may become too large in scope to be handled by the normal county and municipal operating services."