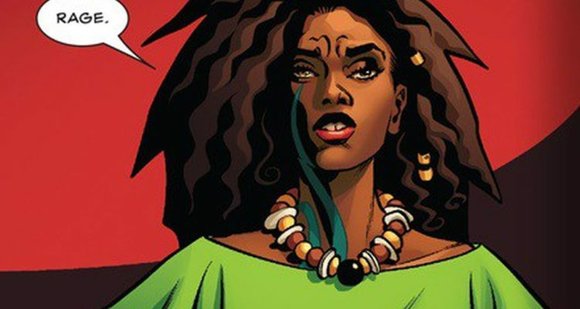 Roxane Gay is the first Black woman to write for Marvel Comics and will be joining forces with Ta-Nehisi Coates and poet Yona Harvey to add her magic to the new Marvel comic series titled “Black Panther: World of Wakanda.”

It’s sad to report that in 2016 we are excited that the pairing of Gay and Harvey “will make history by becoming the first Black female writers in the Marvel comic universe,” but the truth is the truth, and because comic book series can make creators wealthy, it’s great news to share.

Creative illustrators should mark this news with a smilie icon because, as Gay stated, “Black women are also doing the cover art.”

The fantasy world is getting juicy characters with compelling story lines in the “World of Wakanda,” which will primarily focus on Ayo and Aneka, the two lovers who are former members of the Dora Milaje, the Black Panther’s female security force.

The goal of this series is to go deeper into the stories of the women of the “Black Panther” universe. Gay and Harvey were both personally sought out by Coates to bring a female perspective to these two characters, and to deeply explore the lives of Black women and queer Black women.

It media interviews, Gay has said, “I love being able to focus on women who are fierce enough to fight but still tender enough to love. … It’s the most bizarre thing I’ve ever done, and I mean that in the best possible way. The opportunity to write Black women and queer Black women into the Marvel universe, there’s no saying no to that.”

In an interview with The New York Times, Coates emphasized the importance of having diversity both on the page and on staff at Marvel. “We have to open the door,” she said. “It’s not, ‘Wouldn’t it be nice if there are more women writers, more women creators in comics?’ That would be nice, but in many ways, it is kind of an imperative.”

The comic book world went “nutty,” in 2015, when the gifted Ta-Nehisi Coates was tapped to write “Black Panther.” To date, the series has released three issues and all to tremendous success. “Black Panther: World of Wakanda” is scheduled to debut in November of this year.

Gay is the author of numerous pieces of fiction and nonfiction, and is best known for her collection of essays titled, “Bad Feminist,” in which she writes about the representation of Black lives on screen and on the page. Gay’s most recent novel, “An Untamed State,” will be adapted into a feature film by Gina Prince-Bythewood and will star Gugu Mbatha-Raw.