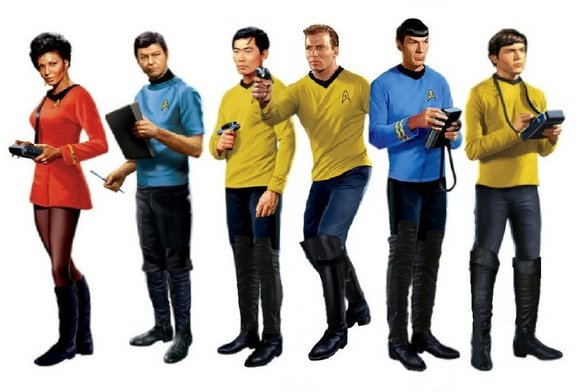 WASHINGTON—As the iconic science fiction franchise “Star Trek” celebrates its 50th anniversary, America is in many ways living in a “Star Trek” world. From handheld “communicators” to a multiracial command crew, “Star Trek” propelled the world into the 21st century.

The series introduced the world to talking computers, doors that opened upon approach, wireless, handheld communication devices that allow people to see and talk to each other from distant places and also wireless headsets.

And did you know the Rev. Martin Luther King Jr. was a huge fan and was responsible for one of the actors not quitting the show?

There gadgets used on “Star Trek” are mirrored across today’s technology landscape. Handheld communicators used by the crew predicted the cellphones we have now used for nearly two decades. Lt. Uhura, communications officer on board the Enterprise, sported a wireless communication headset, decades before Bluetooth technology was invented.

The automatic opening doors, unheard of in 1967, are common in nearly every big box store in America.

According to Dr. Charles Kim, an electrical engineer and computer science professor at Howard University, these gadgets were only made possible by the development of microcomputer processors in the 1980s.

“The biggest breakthrough, was combining software power and powerful, miniaturized computing processors together,” Kim said. “This is something we could not do before. Now everywhere small chips can do anything you want.”

Enterprise crew members were also seen talking to their computers and communicating through live video transmissions. Capt. Kirk was able to research subjects through a mechanism much like Apple’s Siri.

Even today there is a $10 million competition to build a handheld device that can diagnose a number of diseases and vital signs. Sounds like the tricorder used by crew members of the Enterprise.

In the midst of the Civil Rights Movement and at the beginning of the organized push for more inclusion for women, “Star Trek” aired programing showing a racially and culturally diverse crew, even as programing was mostly all white. An African-American, an Asian, a Russian and even the alien Spock were among the command crew.

Additionally, women were featured in leadership roles, such as actress Majel Barrett as the first executive officer, second in command to Kirk, and African-American Nichelle Nichols as Uhura, fourth in command to Kirk.

Later, women would appear as admirals and captains commanding their own ships.

According to an interview with NPR News, Nichols almost quit “Star Trek,” until King, who told her he was her biggest fan, convinced her to stay with the show during a cocktail party in which they were both invited.

In the interview, Nichols recalled King saying to her, “You are reflecting what we are fighting for.”

He went on to say, she recalled, “For the first time on television, we will be seen as we should be seen every day, as intelligent, quality, beautiful people who can sing and dance, yes, but who can go into space, who can be lawyers and teachers, who can be professors—who are in this day, yet you don’t see it on television until now.'”

King also told Nichols that because of the show’s diversity, “Star Trek” was the only show he and wife Coretta would allow their children to stay up late to watch, even though it was past their bedtime.

Other celebrities, such as Whoopi Goldberg, also recognized the show’s diversity in their childhood. When “Star Trek: The Next Generation” aired in the late 80s, Goldberg wanted a role. She felt that before “Star Trek,” there were no African-Americans in science fiction.

Aside from having a command crew of different nationalities, the barrier-breaking series is credited as the first American network television series showing an interracial kiss. In an episode airing in 1968, Nichols and William Shatner, who played Kirk, are seen sharing a kiss.

Though the NBC television network ordered a version of the scene in which the actors faked the kiss, the take looked too “corny,” Nichols said in her autobiography. In the autobiography, Nichols claims the episode was received well. “We received one of the largest batches of fan mail ever, all of it very positive,” Nichols wrote.

In truth, however, some television stations in the South refused to air it.