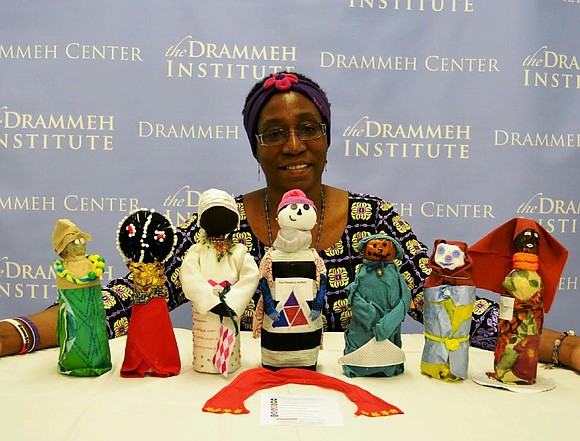 Of the 24 percent of women that make up the STEM workforce, only 2 percent are African-American.

White and Asian men dominate STEM fields, comprising about 69 percent of the workforce, reflecting similar numbers from more than a decade ago. However, there is hope for increasing diversity with the creation of programs that promote minority women’s interest in coding, math and science. But the ethnic and gender gap remains large.

Nkechi Agwu, a mathematics professor at CUNY Borough of Manhattan, is determined to fill the gap through her unconventional method of math instruction.

She calls it mathematical storytelling. In her book, “God’s Own: The Genesis of Mathematical Storytelling,” she teaches that by building traditional Ndebele dolls and telling the stories of African women, students can be liberated from math anxiety and generate appreciation for math and science, especially for inept students.

Ndebele dolls are commonly associated with the ethnic group of the same name in South Africa. The dolls represent various aspects of life, including initiation into adulthood or fertility. But a less common fact is that their dolls and traditional cultures, like many other African ethnic groups, are founded on math principles.

“You will never find anything about them in the mathematic textbooks, but yet when you observe their lifestyle, you will see a lot of mathematics,” Agwu explained. “My favorite story is about my own grandmother who taught me to play a cultural brick game that is popularly known as Mancala; we call it Okwe. Even though she never went to school, she was an expert player. I was [convinced] my grandmother was a mathematician because she could see 10 moves, 20 moves ahead. I saw the mathematics, but could never see ahead.”

Agwu’s goal is to teach students about the intricacies of African culture and its influence on the modern world, while creating math competency. Former students often celebrate their math literacy and their newfound confidence to help other struggling students after completing her course. She hopes that through her programs more women of color will enter STEM fields.

Mathematical storytelling is now an international concept being taught in schools and intuitions in Nigeria. At CUNY it is also a course offered to fulfill math requirements for graduation.

Simplifying math in order to address issues of representation in STEM fields is the goal at this point. Agwu wants to expand beyond formal institutions to reach a younger audience. She’s partnered with The Drammeh Institute, a local nonprofit, to teach these concepts to African-American girls in the Bronx.

“We want to create a more aggressive movement towards connecting girls with STEM-related fields. We want girls to be excited about learning science and technology, while at the same time appreciate African identity and culture,” said Iman Drammeh, founder of the institute.

The program will be free for all students, but there are only 16 spots for high school girls between 13-17 years old. Beginning April 8, 2017, students will work for a week with Agwu creating Ndebele dolls and learning complex mathematical concepts and African culture.

Black women who have achieved in STEM fields will share their stories with students throughout the program as well. A closing reception April 16 will give girls the opportunity to meet an astrophysicist, mathematicians and agriculturists who have made strides in math and science today.

Students interested in participating in the weeklong program may learn more at the www.drammehinstitute.org. Donors can also contribute to the program at www.ndebeledollsculpturing.causevox.com.