United Way and the Giants partner for education 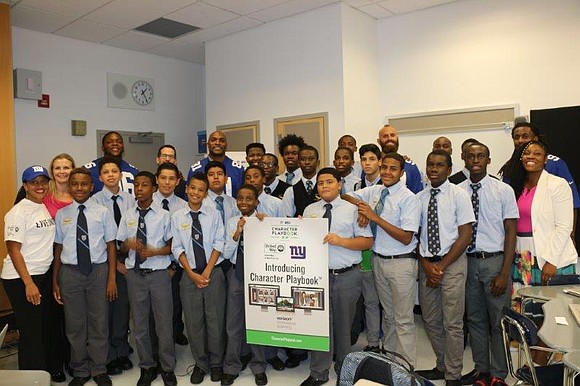 Monday, at the Eagle Academy for Young Men in the Bronx, the United Way of New York City and the New York Giants, with the support of Verizon, launched the Character Playbook, an interactive online course designed to facilitate character development and social emotional growth in preteen and teenage middle school students.

The program, functioning on technology created by EverFi, a company that focuses on teaching, assessing and certifying students in critical skills areas, will be utilized by thousands of youth at 20 middle schools throughout New York City.

The Eagle Academy, which serves primarily boys of color in grades 6 through 12, was founded in 2004, with its first school established in the South Bronx. The network of schools, managed by the Eagle Academy Foundation, headed by its president and CEO David Banks, is a national pioneer in the all-boys public school education model. Eagle currently has one school in every borough, as well as in Newark, N.J.

The educators at Eagle Bronx, under the direction of its principal, Hector Velazquez, envision the Character Playbook as a significant learning tool for their nearly 300 middle school students.

“The curriculum aligns with Eagle’s core values,” said Kyesha Ruffin, a science educator at Eagle Academy and one of the event’s coordinators. “It will provide students with a foundational experience in middle school and cultivate some of the essential skills they need to thrive both inside and outside of the classroom.

“It synthesizes their transition to high school,” noted Ruffin, “and will help them with managing academic and social challenges associated with the change.”

Monday’s event produced excitement and profound interest among the Eagle students as current Giants players Kelvin Sheppard, Mark Herzlich and Jay Bromley engaged them in a computer class while students were introduced to the Character Playbook.

The budding scholars also participated in an assembly with former Giant and FOX NFL analyst David Diehl as master of ceremonies and attended by Armani Toomer, who played for the Giants from 1996 to 2008 and together with Diehl won a Super Bowl ring in 2007. Toomer is a board member of the United Way of New York City.