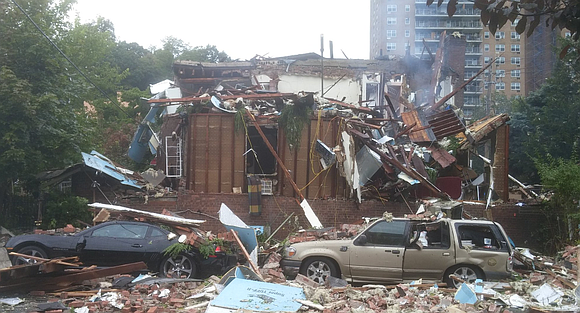 Officials said a meth lab was the cause of an explosion in the Bronx Tuesday morning. Twitter/@SBANYPD

Battalion Chief Michael Fahy, the father of three young children and son of a decorated former firefighter, was directing the response to a possible gas leak outside a two-story residence in the Bronx when he was struck by debris about 7 a.m., officials said.

"A tragedy has befallen a family, our fire department and our entire city," Mayor Bill de Blasio told reporters.

Twenty others were treated at hospitals for injuries that were not life-threatening: nine firefighters, six police officers, three gas utility workers and two civilians, according to Fire Commissioner Daniel Nigro.

Police Commissioner James O'Neill said his department had recently initiated an investigation into a possible "marijuana grow house" on the block where the explosion occurred. No arrests have been made.

The cause of the explosion -- on a block of brick row houses just over a mile from the northernmost tip of Manhattan -- is under investigation.

Firefighters initially responded to a call from a passerby who reported the smell of gas leak on a quiet, tree-lined street in the Kingsbridge section of the Bronx, officials said. An occupant of the home left before the explosion.

The explosion occurred about an hour after authorities arrived, with Fahy standing on the street outside the home.

"One of our rising stars," Nigro said of the battalion chief. "He was on the rise. He was a star, a brave man. He was doing what fire officers do."

"We lost a hero today and our members are all saddened," the fire commissioner said.

"Today we lost one of the best of the bravest," Lemonda said in a statement.

"Our thoughts and prayers go out to his wife Fiona, his sons Michael, 11, and Cormac, 6, and his daughter Anna Elisabeth, 8, and the rest of his family."

The force of the explosion stunned residents on the block.

"I was in my apartment washing dishes and all of a sudden I heard a loud boom and the house shake," Jennifer Mullane told CNN. "I looked out the window and I saw the police station across the street and cops just started running down the block."

CNN's Ray Sanchez and Shaquille Omari contributed to this report.