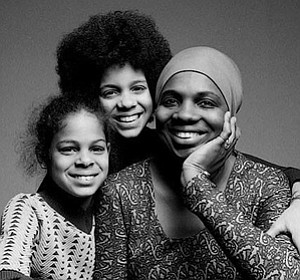 Vertamae Smart-Grosvenor with her daughters, Chandra and Kali Dwight Carter

A coterie of scholars and activists around the world were stunned to hear that Vertamae Smart-Grosvenor had joined the ancestors. Many of them recalled being in her company and experiencing a swirl of commentary and storytelling, all delivered in her distinctive Gullah-Geechee language. She was a mesmerizing force of nature, and that magnetism was often enhanced by one of her sumptuous feasts.

The famed griot passed Saturday afternoon, Sept. 3, in Riverdale, N.Y, where she had been living in a senior home, according to her daughter, Kali Grosvenor. No causes were given for her death.

“I was a three-pound premature twin,” Smart-Grosvenor wrote at the start of her book, “Vibration Cooking or the Travel Notes of a Geechee Girl.” “My brother weighed six pounds and didn’t make it. It is true that they said, ‘The boy done dead, and the gal ain’t gonna make it.’”

Not only did Smart-Grosvenor make it, she thrived productively during her 79 years as writer, actress, dancer, designer, raconteur, griot and, most notably, as a culinary anthropologist.

Born April 4, 1937, into the Smart family in Fairfax, S.C., Smart-Grosvenor grew up in Monk’s Corner in the same region, where everyone was related, she often recounted. As a youngster, she was kicked in the head by a mule and when, because of her color, the hospital in Orangeburg would not treat her, along with other factors, the family moved to Philadelphia.

“She learned the fundamentals of cooking while still in South Carolina under the tutorage of her maternal grandmother, Sula Ritter,” her daughter Kali wrote in an email. “Those skills were enhanced later in Philadelphia by her paternal grandmother, Estella Smart.  Estella Smart also taught her sewing skills. Vertamae’s father, Frank Smart, was a gifted cook and she learned a lot from him.”

From her relatives and extended family across the globe, Smart-Grosvenor expanded both her food table and friendships. In effect, her kitchen was a gathering place for world cultures and cuisine. “Afro-Americans could be associated with all foods, not just so-called ‘soul food,’” she wrote in 1986, after a trip to Cuba with nine other writers, sponsored by Black Scholar magazine.

“In 1968, when I met Vertamae,” said literary agent Marie Brown, “she was a space goddess in Sun Ra’s then, Solar Myth Arkestra. She was also writing a cookbook, the mother of two young daughters and a Lower East Side legend. We developed a sisterly bond and lifelong friendship from the very beginning of our work together on ‘Vibration Cooking.’”

Along with her regular appearances on NPR, Smart-Grosvenor lectured widely and published several books, including “Thursdays and Every Other Sunday Off: A Domestic Rap” (Doubleday, 1972) Two additional versions of “Vibration Cooking” are in print. She also wrote many articles and columns for such publications as the Amsterdam News, Essence, Ebony, Jet and Redbook. As an actress, she had roles in Julie Dash’s “Daughters of the Dust” and Oprah Winfrey’s “Beloved.” Dash is writing and directing a documentary film on Smart-Grosvenor’s life called “Travel Notes of a Geechee Girl.” Smart-Grosvenor’s archival works have been preserved at The Avery Research Center for African-American History and Culture at The College of Charleston, which has been her fiscal sponsor since 2011. The Smart-Grosvenor archival elements will include her oral history, video and transcribed commentary by family, friends and scholars.

In her essay “Kitchen Crisis,” in “The Black Woman: An Anthology,” edited by Toni Cade Bambara, Smart-Grosvenor wrote, “…Cooking of food is one of the highest of all the human arts. We need to develop food consciousness. So-called enlightened people will rap for hours about Jean Paul Sartre, campus unrest, the feminine mystique, Black power and Tania, but mention food and they say, rather proudly, too, ‘I’m a bad cook.’ Some go so far as to boast, ‘I can’t even boil water without burning it.’ That is a damn shame. Bad cooks got a bad lifestyle. Food is life.”

“Verta was truly a cultural phenomenon: a gifted raconteur and wordsmith, exquisite cook, world traveler and whose award-winning commentary on NPR is everlasting documentation of our rich cultural heritage and evidence of a life well lived,” Brown added.

Smart-Grosvenor was married twice. Her first husband was Robert Grosvenor and Kali Grosvenor Henry is their daughter. Her second husband was Ellsworth Ausby. Both were visual artists. Oscar Weinland is the father of her other daughter, Chandra Brown.

Among her survivors are her daughters Kali Grosvenor Henry and Chandra Brown, son-in-law Vincent Henry and grandchildren Oscar Brown IV and Charlotterose Jefferies.