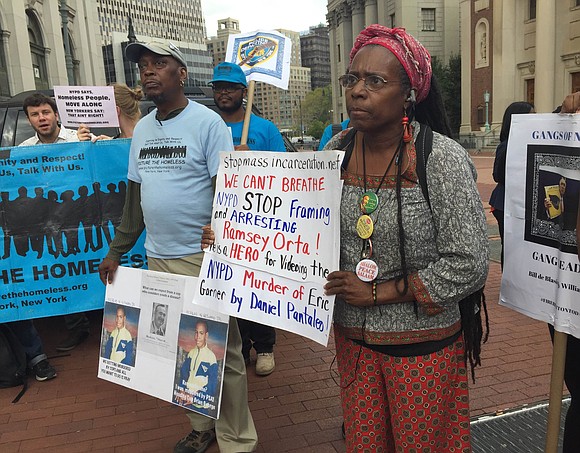 “Working together in partnership in our neighborhood-based policing initiatives, they are forging the way forward in crime fighting and collaboration,” wrote former New York Police Commissioner Bill Bratton in his resignation letter addressed to Mayor Bill de Blasio.

There are a few people who would dispute the New York Police Department as a whole working with the community.

Last week, Bratton took a victory lap around the five boroughs, concluding with a final walk out of One Police Plaza in Lower Manhattan. Bagpipes, dignitaries, officers, elected officials and pomp and circumstance were a part of the ceremony. However, one group of people were off to the side and separated by a barricade. Their jeers were drowned out by the cheers of those shaking hands with Bratton.

These protestors were the activists, advocates and even city employees who labeled Bratton’s legacy as “poisonous” to Black and Brown New Yorkers.

“Everything has been a spectacle and a [expletive] photo op,” said Josmar Trujillo of the ad hoc group New Yorkers Against Bratton. Trujillo and others stood outside of One Police Plaza as set up began for Bratton’s last event as police commissioner.

“Bratton’s legacy hasn’t only meant New York City,” continued Trujillo. “He was an adviser in Baltimore when they were going through their Broken Windows evolution. He was a paid consultant in Oakland. He was obviously a police consultant in L.A. He has been one of the most influential people in the history of policing. His touch goes everywhere.”

Trujillo also said that activists in New Orleans told him that Bratton had, allegedly, been an adviser there as well.

Bratton’s victory lap isn’t a victory according to many local activists. A public defender, who wished to not be identified, spoke to the crowd and the AmNews about Bratton’s legacy. She also spoke about what she thought new Police Commissioner James O’Neill would bring to the table.

“I’m so happy to see Bratton go, but we have to make sure his policies go,” the public defender continued. “They are decimating communities of color.”

This past summer alone, the AmNews has reported on several pieces of news that found Bratton’s image at odds with what was happening in Black and Brown communities. In August, the AmNews reported on an analysis conducted by the Police Reform Organizing Project. The report concluded that marijuana possession arrests rose almost 30 percent (9.331) in the first six months of this year when compared with the same period in 2015. The PROP report also showed that 90 percent of the NYPD’s marijuana possession arrests in the first six months of 2016 involved New Yorkers of color.

An August report by the Office of the Inspector General for the New York Police Department concluded that officers broke the rules while surveilling and investigating political activities. Recently, family members of those slain by police gunfire called for City Council Speaker Melissa Mark-Viverito to pass the Right to Know bill and not acquiesce to the handshake deal made with the NYPD.

Back at One Police Plaza, protesters loudly booed anyone they recognized who arrived to attend. Some elected officials felt the brunt of the protestors’ anger, including New York City Comptroller Scott Stringer (who some referred to as a “sellout”) and Public Advocate Letitia James (who protestors compared unfavorably to Bill de Blasio when he was in the position).

The protestors were joined by a city worker who was on her lunch break. The woman, who refused to be identified, decided to speak to the crowd.

“If you [expletive] up on your city job, you get fired,” she said. “If you [expletive] up as a cop, you get desk duty with pay. So let’s talk about the tale of two cities, when a 24-year-old can do time for a bag of weed and Peter Liang gets 800 hours of community service in the place of his choice. The NYPD protects its own. We have to protect our own.”

As Bratton left One Police Plaza to cheers, the protestors decided to send him off with another message: “[Expletive] Bill Bratton!”