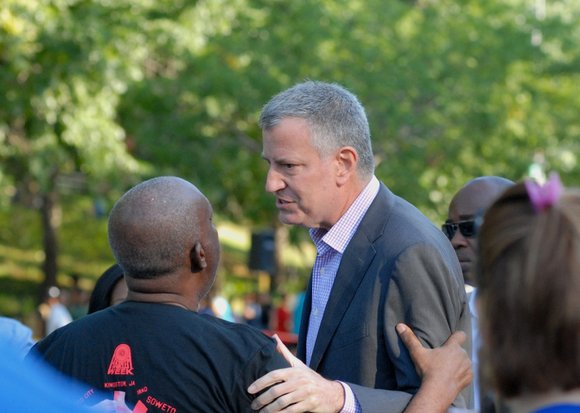 “For the last three years, businesses can no longer punish employees for taking time off to care for themselves or a sick child, a benefit to families and to public health,” said de Blasio in a statement. “At the same time, New York’s economy is booming, with unemployment reaching lows not seen for over 40 years.”

Last month, the New York City Economic Development Corporation announced that the city recorded its lowest unemployment rate since 1976. According to the city, since paid sick leave’s implementation, the DCA has secured restitution for almost 16,000 New Yorkers and recently filed charges on behalf of nine JetBlue ground crew and flight attendants stating JetBlue violated the law.

“Since it went into effect three years ago, the expanded Paid Sick Leave Law has helped hundreds of thousands New Yorkers, especially low-wage workers who need the protections most, take time off when they are sick without worrying that it will cost them much-needed pay or their jobs,” said Hector Figueroa, president of 32BJ-SEIU, in a statement. “As we face increasing threats to workers’ rights at the federal level under the Trump administration and the Republican-controlled Congress, these worker protections are even more important at the local level.”

New York City’s Paid Sick Leave Law went into effect in 2014 with the city becoming the seventh jurisdiction in the country to have such a law. More than two dozen additional jurisdictions enacted similar laws. According to a survey by the Murphy Institute and Center for Economic and Policy Research, more than 85 percent of employers didn’t see a negative impact on business after the paid sick leave bill went into effect. Ninety-six percent of employers surveyed saw no change in customer service and an increase in productivity.

“Robust outreach and enforcement of New York City’s paid sick leave law is ensuring that the workers the measure was intended to help—workers with low incomes—are actually benefiting,” stated David R. Jones, CEO and president of the Community Service Society. “We look forward to continuing to work with the Mayor and the Council on advancing additional initiatives to protect vulnerable workers. This work will put New York City on the forefront of progressive policies that combat economic inequality and facilitate upward mobility.”

“On the third anniversary of paid sick leave protections going into effect, it is important to remember that while our city is doing what it can to protect workers, they are nonetheless under attack from a federal government that sides with billionaire corporations and deploys racist rhetoric to attack our hardworking immigrant workers,” added Deborah Axt, co-executive director of Make the Road New York, in a statement. “We need our city more than ever to stand with workers and to have our backs.”