Kalief's legacy: Rikers closure set, yet could prove to be long, grueling process 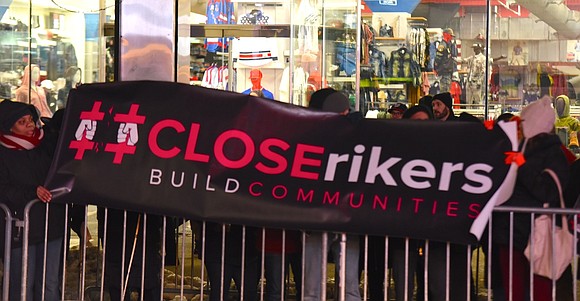 “This is a bold, progressive plan that will ultimately improve the lives of inmates and staff alike, making us all safer while also saving taxpayer dollars,” CUNY Institute for State and Local Governance Executive Director Michael Jacobson said, “Implementing these recommendations will require significant political will. It will be hard work, but work that is worth doing—work we are obligated to do to ensure a justice system that embodies dignity, equality and fairness for all.”

Getting Rikers on the path to closure has been a long campaign for the many city activists who have done as Che Guevara directed: “Let’s be realistic. Let’s do the impossible.”

The #CLOSErikers campaign stayed the course in an effort to “highlight the persistent dysfunction on Rikers, a penal colony defined by its resistance to reform.” This week they noted, “For decades, Rikers Island has been marked by violence and corruption. Stories regularly emerge documenting the abuse, brutality and death in the institution. The #CLOSErikers campaign was formed in 2016 to break political gridlock and achieve solutions guided by directly impacted communities. Led by JustLeadershipUSA, in partnership with the Katal Center for Health, Equity, and Justice, the #CLOSErikers campaign includes community groups, researchers, business leaders, faith and human rights leaders, criminal justice experts, health and housing service providers, advocacy and legal groups, and more. Through the campaign, more than 135 organizations across New York City have joined the call to close Rikers Island. We are proud to now count Mayor Bill de Blasio and the Independent Commission on New York City Criminal Justice and Incarceration Reform among those who support that call. By closing Rikers, New York City can focus on healing and rebuilding the communities where Rikers has brought suffering. The campaign to #CLOSErikers is calling for New Yorkers to boldly reimagine the city’s failed criminal justice system and become a national leader in ending mass incarceration.”

Brooklyn Council Member Jumaane Williams said in a statement that although he applauds the Rikers closure, he believes the criminal justice system should be fixed entirely.

“Now that there’s been a commitment to close the detention center, we must think of a responsible way to shut down Rikers Island,” he said. “While it could mean new facilities, it doesn’t necessitate it. A combination of pre-trial tools and policies and existing penitentiaries could suffice. Not to mention the ongoing positive shift to investing in a preventative paradigm.”

Rikers Island opened in 1932 and currently houses 10,000 inmates, with 80 percent awaiting trial. De Blasio said that he plans to cut the inmate population to 5,000. Reports indicate that nearby LaGuardia Airport could be expanded once Rikers is closed, adding another runway and terminal.

The correction facility has come under fire recently for alleged abuse by corrections officers, long wait times for trials and other deplorable conditions. Just last week, a former Rikers correction officer, an inmate and the inmate’s wife were indicted on charges they brought marijuana, alcohol and tobacco into the jail. James Brown, 45, of Queens, who became a correction officer in January 2016, was arraigned on charges that include third-degree bribe receiving and official misconduct. Between Nov. 2, 2016, and Dec. 9, 2016, Brown allegedly accepted $700 from an inmate’s wife to bring in the contraband to her husband, who is being held on a Queens attempted murder charge.