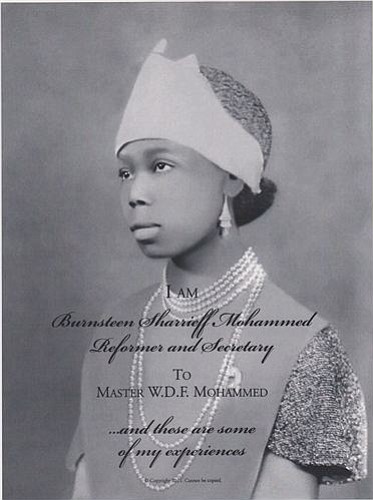 Without Burnsteen Sharrieff Mohammed’s secretarial and clerical skills and her intuitive understanding of W.D. Fard’s beliefs and principles, the Nation of Islam might never have blossomed. Much has been written and discussed about the emergence of the NOI, but rarely do they include the indispensable contributions of Mohammed or Muhammad. It was her ability to decipher Fard Muhammad’ notes, to develop his concepts and to structure his vision that gave life to an organization later brought to prominence by Elijah Muhammad.

Much of this history, for so many years missing, came to light after Mohammed’s siblings found the documents in the house where their mother lived. (She died Feb. 28, 2002.) Six years ago, they took the rare documents, including letters from W.D. Fard, plans and a syllabus for a University of Islam and policies governing the organization, to Detroit attorney Gregory Reed. Reed helped the family secure the documents and prepare them for exhibit and a national tour.

Reed also began the process of creating a The Fard Center for Research and the possible publication of some of the more relevant documents.

The discovery was a trove of information about the early years of the NOI and the life and times of W.D. Fard, particularly his relationships with Mohammed and Elijah Muhammad.

According to her brief autobiography, Mohammed first encountered Fard in October 1932 in Detroit’s Black Bottom when she was 17. “Every Tuesday we had a picnic with Muslims only,” she related after noting the location of the Temple of Islam over the Castle Theater on Hastings Street. “We danced, played games, especially baseball. At the picnic, we would win prizes.”

But beyond the games and recreational activity was her commitment to help Fard transcribe and circulate his dictations. “I converted from long hand into typing,” she continued, something she could do with great speed and accuracy after studying at the city’s Commerce High School. “Of the first nine laborers chosen by Master W.D. Fard, I was the only female laborer.”

She recalled that Fard wrote her lines at the bottom of his notes and letters. “‘Always re-read what you type,’” he insisted. “‘Don’t close your eyes and trust in God!’ Now he taught us that the Black people were the god, so when I would say my prayers, I’d shut my eyes and envision that great mass of people as God.”

Not much is known of Mohammed’s early years, other than she was born July 14, 1915, and attended Commerce High School, where she was among the best students in acquiring secretarial and clerical skills, including her ability to type nearly 100 words a minute without errors.

Her proficiency was so important that Fard made her his secretary and gave her the title of “The Reformer.” And even with her great skills and insight, it must have been a challenge at times to fully discern all of Fard’s ideas and creativity. Consider this problem that was part of the papers discovered by attorney Reed and transcribed by Mohammed: