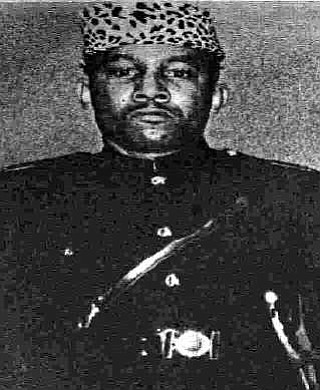 African and African-American history can hit you in some of the most unpredictable places, if you pay attention. During a recent session with photographer Kwame Brathwaite, as we thumbed through his astonishing collection of photos, there was one of Carlos A. Cooks, arrayed in his leopard patterned hat, reviewing his troops.

Unless you’re a devotee of Black Nationalist thought, you may not have heard of Cooks and his contributions. He may not have had as great a global following as his mentor, Marcus Garvey, but there was a time, particularly on the streets of Harlem in the ’40s, ’50s and ’60s, when Cooks and his African Nationalist Pioneer Movement captured the political pulse of the community with an influence beyond its small cadre.

Although Cooks was born June 23, 1913, in the Dominican Republic, his recognition was forged in Harlem, where he was an unwavering advocate of the philosophy and opinions of Garvey. A year after Garvey’s death in London in 1940, Cooks, on his birthday, founded the African Nationalist Pioneer Movement, with the expressed purpose of keeping Garvey’s legacy of African redemption and reclamation alive.

One of the first notices of Cooks and ANPM (he adamantly avoided the press) appeared in the New York Age newspaper in a guest column written by Jane Cooke Wright in September 1941. Introducing Cooks to her readers, Wright wrote, “The Honorable Carlos Cooks, an important character in the advance division of the Universal Negro Improvement Association, exemplifies the views of Marcus Garvey. He preaches the supremacy of the Blacks. This wishful thinking, he believes will someday come true. At present the white people in Europe are killing each other off and therefore the final battle will be between the whites and the Blacks on the sands of Africa.”

Wright went on to say, in her description of Cooks’ organization, calling it the African Pioneering Syndicate, that it had obtained the right “to buy, sell, import and export products within the United States and the right to establish businesses and industries” in the U.S. and foreign countries.

Such aims and ambitions, emulating Garvey’s vision, may have been paramount in the beginning of the ANPM, but it was gradually superseded by its political outlook. And much of what was known about the organization flowed from the speeches Cooks delivered on the streets of Harlem. Wright, in her column, notes that Cooks, along with Arthur Reid, Robert Jordan and Ras DeKiller, were the foremost street speakers of the day, and they would pave the way for such notables as Ed “Porkchop” Davis, Charles Kenyatta and even Malcolm X.

This point is underscored by Robert Acemendeces Harris, a loyal follower of Cooks who kept the ANPM flame burning until his death several years ago. Often during his appearance at the Harriet Tubman School as part of presentations sponsored by Elombe Brath and the Patrice Lumumba Coalition, Harris would expound on the importance of Cooks and the impact he had on the evolution of Black nationalism and Pan-African ideology.

It was at these meetings that Harris would remind the audience that it was Cooks who coined the phrase “buy Black,” many years before it was popularized by others, including Cora Walker of the Harlem Co-op Market. “It was Carlos Cooks who kept Garvey’s UNIA red, black and green tricolors displayed daily and nightly,” Harris wrote in a tribute to Cooks. “Go on over to the African Market at 125th Street near Lenox Avenue, ask for Brother Frank Jones ‘cause he can tell you about it.” In Harris’ estimation, Cooks gave inspiration to the founding of the Republic of New Afrika and promoted the strategy of armed retaliation that brought Robert Williams to prominence.

The seminal thinking of Cooks, according to Harris, can be found in various aspects of the African freedom struggle. Whether in terminology where the “Negro” designation was replaced by “Black” or “African-American,” in celebrating the birthday of Marcus Garvey or even in beauty pageants with an emphasis on standards respective of an African outlook, Cooks was a forerunner.

Many of the programs and initiatives that pertained in the Patrice Lumumba Coalition and even earlier in AJASS evolved from the ideas put forth by Cooks and the ANPM. It was unfortunate that Cooks was not around to witness the fruit of his activism that blossomed in the late ’60s. He would have been proud of his unflinching determination to speak truth to power, the political change that swept across Africa and the Caribbean and the rise of Black Power in the U.S.

These developments owe much to the dedication of Cooks, and as Harris said, “Carlos Cooks was truth personified. It is also the truth that if one man can be singled out as the individual personality most responsible for the resurrection on Marcus Garvey’s philosophy and program, then that man is Carlos Cooks.”

Harris continued, “Carlos Cooks was to Black nationalism what John Coltrane was to the so-called avant-garde jazz, and what Aretha is to soul music—the prime progenitor among their respective peers. The main difference was the fact that during his lifetime, Cooks never received his proper recognition. This was mainly because he was denied national coverage—by white and ‘Black’ press—and was bound by an oath…not to seek publicity for himself.”

He may have honored the oath not to promote himself, but there was no way he could keep others from celebrating his life and legacy. “Instead of being consumers we should be owners,” Cooks charged. “We’re always crying about employment, yet we don’t create businesses where we could employ our own children, neighbors and friends, and empower the Black community just as other people empower their own.”

In his essay on Cooks in “The Harlem Cultural/Political Movements, 1960-1970, From Malcolm X to Black Is Beautiful,” published by Gumbs &Thomas in 1995, Nab Eddie Bobo recalled of the leader, “He was the embodiment of commitment without egotism, and courage that would not falter or crumble even under the constant bombardment by the media’s propaganda meant to destroy the minds of a rich and noble race.”

In the same publication, Brath remembered an encounter between Malcolm X and Cooks. According to Brath, Malcolm asked Cooks, “Why can’t we get together?” Cooks responded, “We’ll get together when you get a program.”

This encounter was about as close as the two giants came, although their political connection was undeniable.