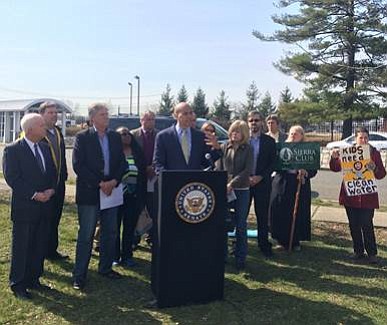 “New Jerseyans understand when we defend our environment we are also protecting our public health and economy,” said Pallone. “We remember the pollution throughout our state before the EPA and we know that climate change was an important factor in the damage Sandy inflicted on our state. President Trump’s environmental agenda jeopardizes our economic future and endangers New Jersey’s public health. Now is not the time to turn back, and I am proud to stand with so many dedicated citizens here today who will fight for clean water and air for our children and grandchildren.”

“It’s simply shameful that President Trump continues to put the interests of corporate polluters ahead of the health and safety of New Jersey families,” said Booker. “The administration’s repeated denial of clear science and proposed gutting of the EPA not only jeopardizes the welfare of all Americans, but it recklessly puts New Jersey’s shore communities at greater risk of catastrophic storms like Sandy and threatens our nation’s economic growth. Under no circumstance should we allow the fundamental right of each and every American to live in a safe and healthy environment be undermined by such destructive ad irresponsible policies.”

“President Trump’s proposed rollbacks and budget cuts do not discriminate,” said Kim Gaddy, Clean Water Action’s New Jersey environmental justice director. “They will devastate all communities at every income level. However, environmental justice communities will take the hardest hit from this man-made crisis. They are on the front lines from ER visits caused by asthma attacks and lead-contaminated drinking water to hazardous flood water and property damage caused by extreme weather that will only get worse if Trump has his climate science denying way. We will not let him get away with it.”

“We are here today because the EPA budget is a disaster to the environment, especially in New Jersey,” said Jeff Tittel, director of the New Jersey Sierra Club. “This is part of President Trump’s war on the environment. Not only is Trump cutting the budget, he is getting rid of environmental protections. By getting rid of one-third of its staff and cutting the budget, it is a one-two punch to eliminate the EPA. His cuts will mean that there will not [be] enough personnel to make sure our water is safe to drink, our land is clean, our air is breathable, and our 118 Superfund Sites are cleaned-up. By cutting enforcement, Trump will create a polluters’ holiday because there will be no one to sure to make sure they aren’t violating the law. This is an outrageous attempt to protect corporate polluters instead of our health and climate.”

Last week, Trump signed an executive order to begin the dismantling of the Clean Power Plan, which had established emission guidelines for states to follow in developing plans to control carbon pollution from existing power plants. Although the Trump administration has not yet decided whether to formally withdraw from the Paris Agreement, by rolling back the policies needed to meet American commitments, many experts fear the United States has already effectively withdrawn.

The Trump administration has also proposed cutting the EPA’s budget by a whopping 31 percent, while reducing the agency’s workforce by 20 percent. Additionally, the administration has suggested massive cuts for NOAA, including the Sea Grant program, which provides vital research on climate change and work to protect New Jersey’s coast.

The EPA Superfund Program is also facing a crippling 30 percent cut, which would make it harder to clean up and reclaim contaminated and polluted sites across the country and particularly in New Jersey, which has the most Superfund sites in the nation at 114.