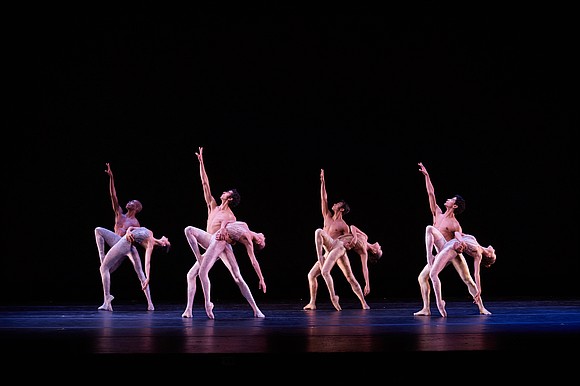 April 19-22, Dance Theatre of Harlem swings into City Center Theater with a program designed to highlight this company’s young, gifted ballet dancers’ command of a choreographic palette that ranges from the cool, elegant precision of classical ballet to the articulate earthiness of modern dance.

Recently, that range was on full display during a rehearsal at DTH’s Harlem headquarters, where dancers offered a tantalizing taste of the upcoming season as they performed sections of Glenn Tetley’s exciting “Dialogues.” Dancers sailed across the studio in pairs, devouring leaps and bounds, or performed athletic, sensual pas de deux from the dance’s four sections.

It’s been close to five decades since DTH founder Arthur Mitchell established his history-making school and company on the strength of a dream, willpower and the support of George Balanchine and Lincoln Kirstin of New York City Ballet, the company where, in 1956, Mitchell broke a barrier in the heretofore lily white world of American ballet.

Now, in the large studio of that landmark home, artistic director and former principal ballerina, Virginia Johnson, is conducting a rehearsal for a small audience of DTH family and friends. On display is one of several highlights of DTH’s upcoming season, “Dialogues,” a work created in 1991 by noted choreographer and former Graham dancer Tetley.

Tetley’s piece is just one of the works on an expansive four programs of NY premieres and audience favorites by such celebrated choreographers as Robert Garland, Francesca Harper, Jose Limon, Dianne McIntyre and Darrell Grand Moultrie.

DTH Artistic Director Virginia Johnson shared insights into the upcoming season and answered questions about the future of Blacks in ballet.

AmNews: How are rehearsals for the upcoming season going?

Johnson: Rehearsals are going well. We just came back from a wonderful monthlong tour. We were out on the West Coast in California and Seattle and we just did two weeks in Pittsburgh, where DTH shared the stage with the Pittsburgh Ballet.

AmNews: There was a time Mr. Mitchell said DTH’s goal was to “prove” that Blacks and Ballet were not dance’s equivalent of oil and water, while also providing dancers much-needed opportunities. What would you say is DTH’s primary mission today?

Johnson: Mr. Mitchell set out to have people see ballet in a new way and I think that is what I still want it to be. We are a 21st century ballet company. People have wanted to define us as a Black ballet company, but we were always a diverse company that gave opportunities to people that had been excluded because of the color of their skin, or their height, or something like that, so we were inclusive in ways that companies weren’t before. But, DTH was also about defining this art form as something that belonged to everyone and that’s what we’re still doing.

Of course, when the company was in its heyday and there were 55 dancers, there were ballets that we could do that we can’t do at the moment with 16 dancers. That kind of puts a lot of the classical cannon in that category because you have to have the massive corps de ballet and the costumes and scenery. We are not in that moment. We are still looking to make this classical art form belong to now.

AmNews: Does that diversity you spoke of relate to the inclusion of women choreographers?

Johnson: While before we had modern dance choreographers like Talley Beatty come in and do caravanserai and Geoffrey Holder did dougla, yes, there is something different with Dianne McIntyre and Francesca Harper. We are creating opportunities for female choreographers in ballet. Dianne created “Change” as part of our Women Who Move initiative. This also affords us an opportunity to help our dancers understand how much more we can say with our bodies.

AmNews: It is wonderful that the City Center program offers audiences an opportunity to dialogue with dancers and choreographers.

Johnson: Choreography and dance are such fascinating art forms and skills. I want people to understand how they work. So I think it’s important for us give people the opportunity to not just see their work but to hear from them, hear what they’re doing and ask them questions. Also, meeting the ballerina is, of course, about inspiring the little ones to be part of this world. I remember when I was once that little starry-eyed child looking up at someone in a tutu thinking, “Can I? Can I?” There’s power in that first interaction that gives you a chance to dream about something you didn’t know you could dream about. I was a young dancer in the 1950s and 1960s in America, which was a hugely segregated situation. It was the beginning of the civil rights era and an important time in the history of DTH. It was a time when people said, “No you aren’t like those people, so you can’t do that.” I think it’s important for people to remember that past.

AmNews: Where would you say the world of ballet is now with respect to diversity?

Johnson: I think there is a very sincere effort to find a way to diversify ballet companies. You see it in companies across the country, but the thing is until we have a thousand dancers of every color in every school it’s going to take time because you can’t suddenly decide you want them and then you have then. It takes a good long time to train ballet dancers. So, we’re in a tough place right now but I think minds are opening. People are talking very honestly, saying, “I want to make this work. I need help trying to make his work.” I’m very encouraged by the desire, but the reality is we needed that desire 10 years ago. Then we would have more dancers of color on the stage today.

The schools are the frontline, so I think there really needs to be a greater effort to go out and recruit young dancers of every economic status and every ethnic variation to make sure we have the kind of diversity coming up through the pipeline.

AmNews: DTH has a wonderful school. You’ve participated in the International Association of Blacks in Dance, convening of major ballet companies to discuss diversity, and you hosted a gathering here in Harlem as well, I believe.

Johnson: Yes, we received a grant from the Mellon Foundation and invited the leadership from the major companies to DTH with the intention of beginning to look at ways of making this diversity thing happen. It was a private meeting. There was nobody in the room except for us, the heads of dance companies, talking about how we see this moving forward. It was a good beginning. Now we want to continue on an annual basis.

AmNews: Are you feeling hopeful about the way things are going?

Johnson: Very hopeful. You know DTH was founded 48 years ago to create opportunity. I often say that when I and other dancers walked into the studio we knew we belonged here. Now, years later DTH has established that normalcy of us in classical ballet, but, you know, I think that the whole process was very much damaged when DTH went on hiatus in 2004. Those years that we weren’t performing, when you think about those eight years and the fact that it takes 10 years to make a dancer, there was a big gap. Now we’re back, and when we travel across the country all kinds of young people come and they want to be part of it. They want to audition and take classes because they say, “Yes, now I can see myself.” It’s a shame that it took so long for us to come back because, in a sense, that is a generation of dancers that we lost.

You know, Zita, we will soon be celebrating our 50th anniversary and I feel that there is a real solidity to the way we’re moving forward, but you know it takes time to put all the pieces together. I’m thrilled with the way the DTH dancers are doing right now, what they’ve learned about themselves, what they’ve learned about performing and how they take the stage and what they’re doing on it. I feel this is a real solid moment for Dance Theatre of Harlem.