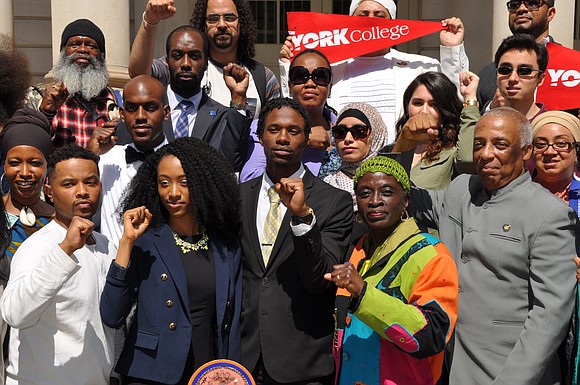 At a news conference on the steps of City Hall, Assemblyman Barron called Cuomo a “fraud” for signing off on the new Excelsior Scholarship and also raising tuition for New York CUNY/SUNY students.

The Excelsior Scholarship, also known as the “last dollar in” program, can only be used to cover any remaining balance after federal grants and scholarships have been applied. It can be obtained as early as fall 2017 for students in middle-class families making up to $100,000 a year.

“The only time tuition was free was in 1849, when it was the Free Academy when white men only could come,” said Barron. “It’s a contradiction to say free tuition and then tell the struggling working-class families that every penny that you get from Pell or TAP, you have to use that for your tuition, and if there’s anything left from the tuition then you can apply for Excelsior.”

With lack of support for struggling lower-class families, the Excelsior Scholarship also excludes funding toward textbooks, transportation, housing and other non-tuition college fees. Students who receive the scholarship must live and work in New York after graduation or it will be converted into a loan that they will have to repay.

Jamell Henderson, a three-time CUNY graduate who is running for the City Council says his first reaction to the news was that he was hopeful that the state would be going in the right direction with this new initiative, allowing every student a chance at a high-quality education like his. After hearing the details of the bill, he calls it “a slap in the face” for its strict requirements.

“You’re mandated to take full-time credits, which for many students, at least in my community some of them have to work part-time or they have to do a full-time job,” said Henderson. “They have to be the leader of their family, maintaining the financial status of the household so, to put that on top of a mandated credit requirement and then maintain a certain GPA it’s a lot.”

Hercules Reid, vice chair of Legislative Affairs for the CUNY University Student Senate and president of the Student Government Association at New York City College of Technology shared his disappointment over the state’s rising tuition costs and the new tuition program, calling it an “easy fix and another temporary bandage to a systemic problem rooted in the divestment from public higher education.”

“Rising tuition and expenses coupled with stagnant financial aid assistance, insufficient state funding, and the prevalence of low wage jobs undermine the affordability and stifles the accessibility to higher education and the advancement of a highly educated and skilled workforce, said Reid. “It is time to stop the ongoing reliance on tuition increases to make up for the failure of the state to meet its responsibility to provide for the education of everyday New Yorkers.”

Barron also spoke on the Raise the Age bill, which now allows 16- and 17-year-old defendants to be tried in Family Court. Barron called the bill “watered down” and exposed the governor’s recent actions as a “campaign ploy” for him to run for president in 2020.

“You have a $153 billion budget,” said Barron. “Why don’t you deal with youth leadership, youth jobs, economic development, job creation programs, more money for CUNY and SUNY to get our children off the street and into education institutions? You’re raising the age just to send them back to jail anyway.”