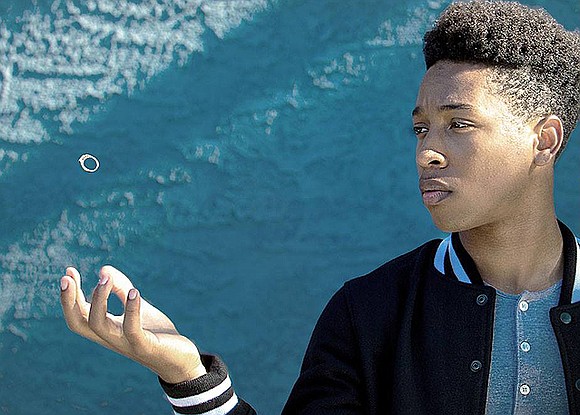 On the surface, the film is about a boy falling in love with a girl and taking care of his little sister, all while trying to survive the modern world. Simple. It’s also about magic. Real magic. Some call magic science, and according to new details about the universe being studied by quantum physicists, a branch focused on studying how particles can be in two states at the same time, we live in a state of perpetual “magic.”

To that end in Dillard’s “Sleight,” the use of magic tricks is transformed into a rather clever metaphor for personal power and life-altering transformation that makes this film an exciting thriller with just the right touch of drama.

Shouldering this film is a great slate of fresh talent on both sides of the camera, displaying the best of the new.

Keeping it simply modern, “Sleight” is set in modern Los Angeles, and Bo (Latimore) is a street magician mesmerizing crowds with his extraordinary skills.

He simply stuns a captive audience with the impossible. Is this magic, real?

On the street, his magic specialty is levitating small metallic objects. He’s using an unusual electromagnetic levitation device he invented himself that’s attached by wires and circuits and imbedded into his arm.

His home life is complicated. After the death of his mother, he’s charged with raising his younger sister Tina (Storm Reid). Making extra income is Bo’s focus.

Street hustling, even for a clever magician, does not bring in enough money. So Bo supplements his income by selling party drugs to rich yuppies and reckless frat boys for Angelo (Hill), an inflexible dealer with enough hint of psychopath to keep an audience on the edge of their seats. Something ain’t right with this Angeleo-boy!

Unexpectedly, love comes searching for Bo, who discovers a note among his magic trick tips with a phone number left by stunning young woman, Holly (Gabriel), an apparent and persistent admirer. She pursues him and when they finally meet for a tame lunch date, he learns that they have a lot common.

They quickly begin dating and forming a quirky family bond, but Bo does not tell Holly about his drug dealing on the side.

Life continues its happy routine until greed—one of the downsides to the drug dealing game—rears its ugly head. When another dealer, foolishly tries to steal customers from Bo’s boss, Angelo, things quickly begin to come apart, and Bo is thrown into the center of the growing storm.

Holly shows up on Bo’s doorstep desperate to escape the violence of her alcoholic mother. Now with two women in his life, Holly and his little sister, Tina, needing his full attention, Bo decides to leave the drug game, which makes Angelo very, very unhappy.

Trapped. That’s what happens when Bo tries to leave Angelo, whose vindictive side emerges like a hungry, roaring Lion.

Survival soon becomes Bo’s sole goal because the madness that colors Angelo’s world threatens everything and everyone that matters to him.

Dillard and Theurer’s script comes alive because of Latimore’s skill; he makes Bo likable. The strength of the casting and Dillard’s fresh direction, I think, saved the script that could have been easily tossed into the Hollywood development bin and filed under save for TV only.

An interesting and calculated risk by the young screenwriters should be applauded because they introduced Bo’s levitation device in the first act but it paid off in the third act, opening up a possible sci-fi franchise.

Latimore is the star here. His performance, bouncing between a steely street-wise hustler and the brilliant magician makes dealing with Angelo’s wrath absolutely believable.