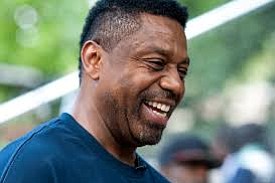 “Life is for the living. Death is for the dead. Let life be like music. And death a note unsaid.”

There are countless people who have been saddened by the transitioning of Greg Marius this past weekend from his earthly state of being to spiritual bliss, people who barely knew him or never met him at all. That is the deeply penetrating impact he had on the cultures of basketball and entertainment, cultures Marius arguably melded as profoundly as any man who has ever lived.

Marius succumbed to cancer at the age of 59 after a courageous battle with the dreadful disease. He is best known—yes, is, because he will live forever—as the founder and CEO of the Entertainer’s Basketball Classic, which had its origins in Mount Morris Park in the early 1980s and ultimately made its permanent residence at the famed Rucker Park on 155th Street in the shadows of where the legendary Polo Grounds baseball stadium once stood.

Long before the NBA embraced and greatly profited from the global movement of hip-hop, Marius was a pioneer in shaping and growing hip-hop’s influence on sports entertainment. He astutely and intuitively recognized the shifting trends of inner-city America, trends that were born in his native Harlem and the Bronx, and provided an innovative platform for artistic expression and brand development for burgeoning rappers, singers and ballplayers.

“Greg was a visionary,” said documentarian Jerald Hoover, Marius’ friend and business partner. “Long before anyone else saw the cultural shift that was taking place, Greg understood that there was a new era of young basketball players and entertainers that didn’t conform to societal norms and provided them a space they could call their own.”

Despite already being established NBA stars, numerous players, such as Kobe Bryant and Kevin Durant, viewed the EBC as a place to secure validation and street cred. The tournament attracted political world leaders, titans of business and industry and blue collar workers alike. Marius moved seamlessly and genuinely among all of them, his ability to connect with people of all stations one of his many gifts.

Above all else he was a father, brother, friend, confidante and mentor. Putting forth full disclosure, Marius was on the board of a company founded by my high school basketball teammate Reggie Johnson, of which I am a co-founder along with another high school teammate Ernie Myers. The advice, counsel and support he provided to us cannot be quantified.

Marius’ next destination should be the New York City Basketball Hall of Fame. This writer will be one of the voices pushing for his nomination, election and induction. It is an honor well deserved. Services for Marius will be held this morning at First Corinthians Baptist Church on 116th Street and 8th Avenue (Frederick Douglass Blvd) in Harlem between 9AM and 12PM.