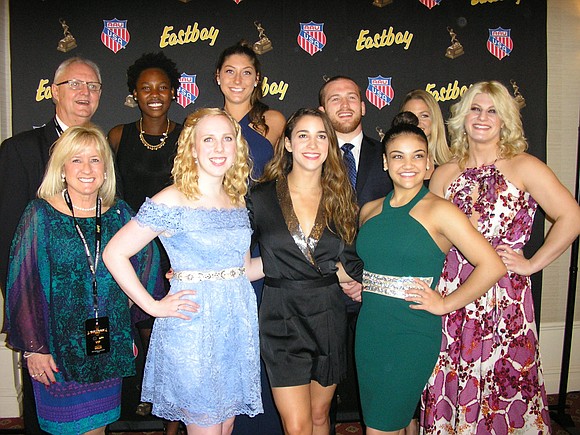 It was one of the most dynamic groups of Sullivan Award finalists in recent memory. Six Olympic gold medalists and a collegiate standout vied for the trophy at the 87th annual award named for the founder of the Amateur Athletic Union.

Finalist Ginny Thrasher, winner of the first U.S. gold medal at the 2016 Olympics, competes in air rifle, a sport where precision is the ultimate decider. “It may be considered a man’s sport, but one of the best parts about shooting is it doesn’t matter what your gender is,” said Thrasher.

Ashleigh Johnson, a member of the gold medal winning water polo team in Rio, said it’s a privilege to shatter stereotypes. “Knowing I was in such a public role and I could potentially have an impact just being in my sport and succeeding, having all those little girls and boys look up to me, has been really important to me throughout my Olympic journey,” said Johnson.

The winner of this year’s Sullivan Award was volleyball standout Lauren Carlini, the first four-time All-Big Ten pick in University of Wisconsin-Madison history. Stunned to have won over six Olympians, she had no speech prepared, but she thanked Badgers fans for voting and vowed to join her fellow finalists as an Olympian in 2020.

“You look at the list of recipients who’ve won this award before and they are outstanding athletes,” said Carlini, who is graduating from college next month and heading to California to train with the national team. “It’s very humbling to be mentioned in the same respect as all these Olympians.”

The evening also included the inaugural AAU Gussie Crawford Lifetime Achievement Award, named for the first woman president of the AAU. This award was given posthumously to Jesse Owens and accepted by his granddaughter, Gina Hemphill-Strachan.

“Through his life, he used the power of sport to motivate, to inspire, to encourage—especially young people,” said Hemphill-Strachan. “It is with a great sense of pride to our family that his legacy 81 years later is still relevant and that he continues to inspire people across the globe to stand in their power, to be a contribution to their communities and to achieve their best always, no matter what that takes.”