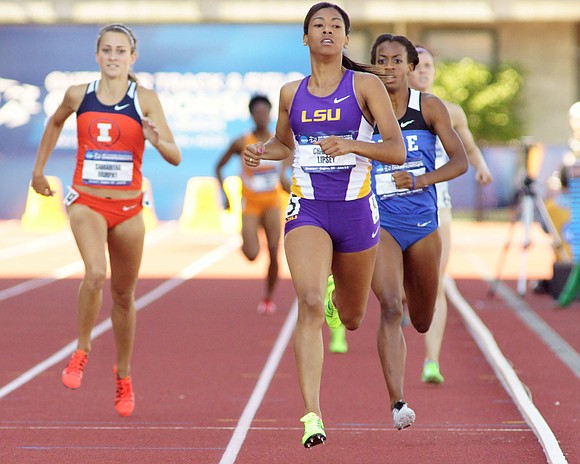 The top track and field athletes from around the world are getting their final practices in before the IAAF World Championships kick off in London tomorrow. The New York/New Jersey area is well represented by a wealth of women’s talent.

It will be a first World Championships for Charlene Lipsey from Hempstead, Long Island, and she is eager to see what she can accomplish. She and training mate Ajee’ Wilson from New Jersey have been pushing each other all year, with both posting history-making times. Lipsey won an 800-meter race in London last month.

After turning pro in 2013, Lipsey has had disappointing results. Since moving her training base to Philadelphia, she has seen dramatic improvement. New coach Derek Thompson has found what works and she’s felt her confidence rise with each race. She described herself as “super excited” for her first trip to the World Championships and admitted she’s eager to participate in the opening ceremony.

“I’m looking forward to the whole experience,” said Lipsey, who recently ran a personal best that established her as one of the top 800-meter runners in U.S. history. “Yes, we’re there to compete, but there are a lot of great things going on.”

She added, “Of course, making the final. That’s definitely No. 1 on the list. I’m super excited and ready to represent.”

A. Philip Randolph Campus High School graduate Natasha Hastings added another World title to her resume before the championships even began. Last week, she and fellow members of the 4x400 relay team at the 2013 World Championships received an upgrade to gold after a member of the Russian team was disqualified for doping. Hastings will be part of the 4x400 relay as will Queens native Phyllis Francis, who will also run in the 400 meters.

Other locals include Deajah Stevens from Bayside in the 100 and 200 meters. Stevens recently announced she is leaving college to turn professional. Olympic gold medalist Dalilah Muhammad will take on the 400-meter hurdles.

“New York attitude, we are definitely aggressive,” said Lipsey, who competed against Muhammad and Francis in high school. “In the 800, because we’re only in lanes for like 25 seconds, there are so many people around and you have to be aggressive and get yourself in front of the pack. I look forward to bringing that aggressiveness and confidence.”