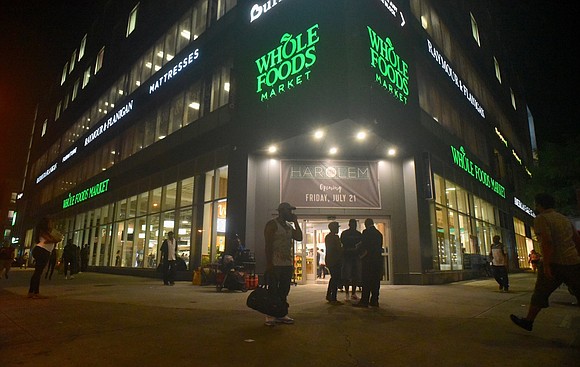 The new Whole Foods in Harlem has seen loads of customers since its opening July 21. Located at 125th Street and Lenox Avenue, the new grocery store undoubtedly brings high-quality foods to the area. Not only is the store bringing a large number of organic products but also it’s bringing a boost to the neighborhood’s real estate market. Call it the “Whole Foods Effect,” the “Starbucks Effect,” the “Trader Joe’s Effect,” whatever you like.

According to Devon Thorsby, real estate editor for U.S News, “A 2015 study by the real estate information company RealtyTrac included 4 million homes located in a ZIP code with either a Whole Foods or Trader Joe’s location, finding that average property values in a ZIP code with Trader Joe’s appreciated by about 40 percent since they were purchased, while homes with a Whole Foods in the ZIP code appreciated by nearly 34 percent.” These findings make sense, as most people want to live in proximity to their favorite stores and brands.

However, the addition of such a franchise is likely to bring issues to the current residents. Whole Foods may increase the value of homes and apartments in the Harlem area, but it will increase so much that the current residents will no longer be able to live in those homes. This will result in the displacement of many Harlem residents, many of them people of color. Real Estate agents are gawking at the profit that Whole Foods will bring to the market, because landlords could easily raise the monthly rent of a one-bedroom apartment from $1,800 to as much as $2,000 or even $2,100.

There has been concern about the smaller businesses in Harlem that surround the Whole Foods. Jordan Stockdale, founder of the online database called Hire Harlem, says that Whole Foods could bring in other large businesses to the area. “Whole Foods may increase the likelihood of additional corporate businesses moving to Harlem and 125th street in particular,” said Stockdale.

Hire Harlem is an online database that allows community members to search for local minority and women-owned businesses in the neighborhood. These businesses can also succeed as long as more corporate businesses support them.

“Harlem small businesses can succeed as long as community members, local organizations and visitors prioritize supporting them,” Stockdale said. “Unlike other corporate businesses, Whole Foods has committed to hiring a portion of their jobs locally, and are selling products from local Harlem vendors—some who do not have storefronts at this time. So Whole Foods is an example of a business that is doing right by the community.”

Through partnerships with community organizations such as Harlem Park to Park, locally sourced goods that come straight from neighborhood vendors are placed on the store’s shelves. The famous neighborhood restaurant Sylvia’s will benefit from Whole Foods’ partnerships as the store will carry many of the restaurant’s products. Whole Foods claims to customize their stores based on the area that they are in, so in this case, it will reflect Harlem’s African-American heritage and diversity.

One observer noted, “Whole Foods is not necessarily the catalyst of the changes that are appearing in Harlem, as real estate prices and the presence of large companies have contributed to changes over the years. Things are continuing to change, but we are all anxious to see how Whole Foods will continue to affect Harlem and its community members.”