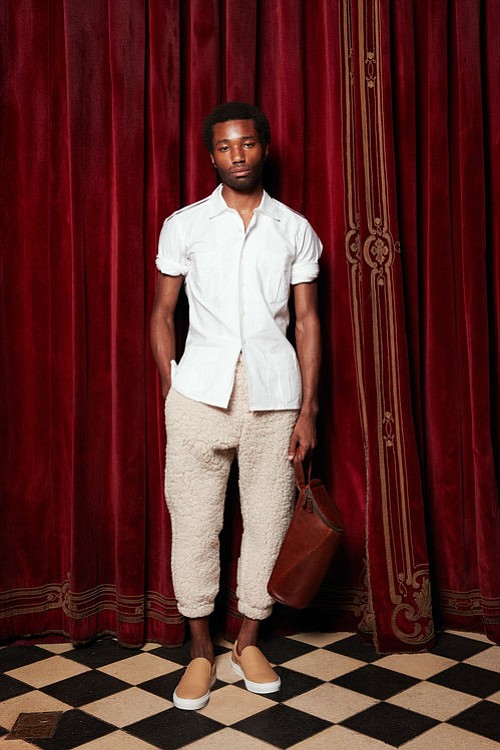 One right after another, New York Fashion Week’s menswear designers presented fabulous shows, and their collections received the best reviews. These talented men and women designers came from all over the world. Palmiere du Mal showed a modern luxury resort collection that was founded in New York. The concepts were created around the world, but the clothes were made in New York City. Most of the looks were inspired by philosophy, travel, design, sex and literature. Other clothes were influenced by the lives of artists and philosophers. This unique collection captures the vanishing spirit of romance. Shapes were global and timeless. The line was constructed in luxurious cashmere textiles. Draping, proportion, pattern and volume were all interpreted in a modern style.

There were several women designers who presented at New York Fashion Week for the first time. Emily Adams Bode, designer of Bode’s menswear line, showed boxy, oversized looks with historical details in work-wear shapes. She studied menswear design at Parsons School of Design. “I wanted to design for somebody outside of myself. I design for this person that is entirely not me,” she confessed. Her spring 2018 collection allowed her to travel to the south of France. While there, she found antique bath towels and mattress fabrics, mostly covered in stripes, plaids, florals and Cezanne-inspired blues. Bode acquired an interesting tapestry jacket from a woman she met at a flea market and collected other remnants from the houses of friends.

Yixi Chen, designer of C2H4, based her Zero Gravity collection on the year 2082. “This is our vision of garments that people will wear in the future,” explained Chen. The collection included lab-coat-styled outerwear, utility vests and high-tech sportswear. She did a capsule collaboration called Undecayable with Kappa. A sci-fi film buff, Chen was inspired by Stanley Kubick’s “2001: A Space Odyssey.”

Deveaux’s designer Andrea Tsao pointed to her practical sensibility and personal style choices for her menswear collection. “What’s special about menswear is that it’s really detail-oriented,” said Tsao at the end of Deveaux’s show. “It doesn’t move quickly with the trends as much as womenswear does, and I think that’s really important.” This Parsons alum makes up one-third of the company; she works with fellow designers Matt Breen and Patrick Doss.

Feng Chen Wang stated, “When I’m designing menswear, everything comes from my heart, and it’s natural.” Each season, she draws inspiration from her life’s experiences. For spring 2018, Wang focused on the relationship with her native China. She revamped her technical outerwear parkas and anoraks with rich details and lightweight mesh. At her show, her collaboration with the Jordan brand created a standout moment as models walked down the runway in custom Air Jordan footwear.

Sanchez Kane, designed by Mexican designer Barbara Sanchez-Kane, likes to dress a little manly. Her design approach comes from the engineering that she studied in college. After graduation, she focused her studies on menswear at Polimoda in Florence, Italy.

Her collection was inspired by those who feel restricted from living their true selves because of societal, familial or religious standards. Her garments were tailored and accented with metal wire, knotted laces and deconstructed lapels that buttoned across the chest. As models made their way along the runway, they gathered around the photocopier in the center of the room, Xeroxing their hands, faces and taping their images on the venue’s walls. “It’s an example of trial and error,” stated Sanchez-Kane. “You have to keep persevering.”