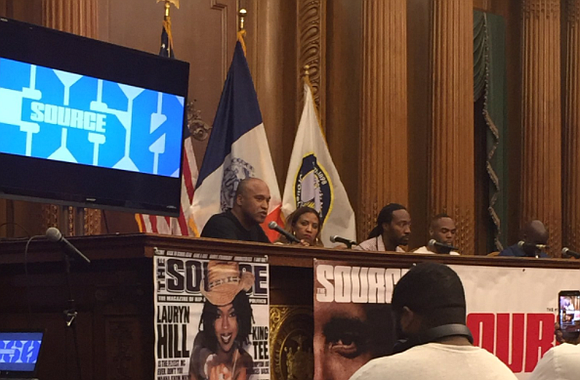 Starting Thursday, Aug. 10, at 8 a.m., The Source magazine will be hosting its fourth annual Source360 Festival and Conference. The festival will be taking place in Downtown Brooklyn until Sunday, Aug. 13. The Source360 Festival is a celebration of the positive effects hip-hop music has had locally, nationally and worldwide. Throughout the four-day festival, there will be cultural and educational activities, leadership panels, signature concerts, training sessions, a brunch celebration, nightlife events, fashion shows and much more. All daily events will be followed by one of the Source360 signature concerts. There will be musical performers and conversation from entertainers such as Mack Wilds, Roxanne Shante, Brand Nubian, Maino, Doug E. Fresh, Casanova, Jay Critch, Mindless Behavior and Bonnie Godiva, along with a musical tribute to Prodigy.

As event founder Londell McMillan told AmNews editor Nayaba Arinde on her “Back to Basics” radio show this past Saturday, the annual festival is for any hip-hop enthusiast who wants to have a good time and relish the family friendly events.

“This festival is for everyone to enjoy,” McMillan said. “But our main goal is to encourage our old hip-hop heads to engage with our youth and to guide them. Currently, there is a big division between the old and new hip-hop music and it needs to stop. Instead of isolating our youth, we should enlighten them about how to make their communities better for the next generation.”

McMillan is an eminent attorney, publisher of The Source magazine and co-head of the Media and Entertainment Global Industry Sector Group at the law firm of Dewey & LeBoeuf LLP. Originally, he started out as an entertainment and business lawyer and worked with celebrities such as Stevie Wonder, Michael Jackson, Lil Kim, Mary J. Blige and Prince. He points out that he also has experience working with filmmakers, politicians and many corporations, including Mercedes-Benz and the National Football League.

Even with all that success, the Cornell graduate sees himself as a “regular Brooklyn guy who was born in Tompkins Houses and had the opportunity to study law, and become a business owner.”

McMillan stresses that he believes in giving back to the Black community and investing in ourselves.  The festival will also host training segments and panel discussions about business and investment. He hopes that attendees who participate in the festival learn something new from hosts such as Master P, and BET head Debra Lee.

“We as Black people have contributed a lot toward America and all other parts of the world, but unfortunately we do not get credit, nor do we benefit from it,” McMillan said on the radio show. “It’s time that we unify and invest in our own business and community.”

The Source magazine, also known as the hip-hop bible, is a media outlet that wants to promote positive and influential messages through urban entertainment. Its mission statement reads in part, “Whether it’s music, fashion, technology, film, sports or culture, this magazine covers it all.”

There will also be cultural community-based venues such as BRIC Arts|Media House, Brooklyn Academy of Music, Kings Theatre, Mark Morris Dance Center, The Brooklyn Navy Yard and others

Registration for the events is free. For more information, contact www.thesource360.com or source360.eventbrite.com.